MAP19: The Popes of Roam (Valiant)

MAP19: The Popes of Roam is the nineteenth map of Valiant. It was designed by Paul DeBruyne (skillsaw) and uses the music track "Sunset Over Babylon" from Jenesis, composed by James Paddock (Jimmy). The par time is 2:00. 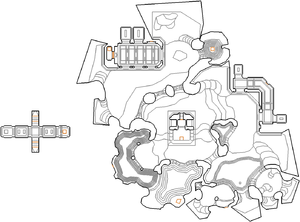 Map of The Popes of Roam
Letters in italics refer to marked spots on the map. Sector, thing, and linedef numbers in boldface are secrets which count toward the end-of-level tally.

You start in a cross-shaped room with two to four cyberdemons on either side. Shoot the target switch in front of you to lower the bars, which will alert the cyberdemons and cause them to teleport away, then enter the orange teleporter to reach a large outdoor area - the cyberdemons will wander this area, and you will need to avoid them as you progress. Dodge the super imps in front of you then head east to a metal building, take the shotgun by the east doorway then go inside and head up the steps to a skull switch guarded by zombiemen. Press the switch, which will open two closets containing imps and shotgun guys, then head back towards the starting building and proceed to the south-west corner - a wall here has lowered and released a group of super demons. Step past this wall to find a super chaingun and a second skull switch.

Press the second skull switch then head to the orange step in the south-east corner, where you can see the blue skull key on a pole; two more walls have lowered here to reveal a pack of imps and cacodemons. Go into the west compartment and press a third skull switch on the south wall, then head back to the starting building and look north-west to see that more walls have lowered to reveal two or three arachnotrons. Enter the marble structure behind the arachnotrons and press a fourth skull switch on the north wall, which will open two compartments to your left containing revenants and also release a pack of imps, demons, arachnotrons and cacodemons across the map. Go back to the south-east corner of the map and pick up the blue key, then go back to the marble structure and open the blue key door in the west wall to find the exit teleporter.

Head east from the marble structure to find a super shotgun; taking it will release six pyro knights around you.

After opening the monster compartments by the blue key, enter the east compartment and walk between the orange walls to find an armor, berserk pack and supercharge.

* The vertex count without the effect of node building is 3391.