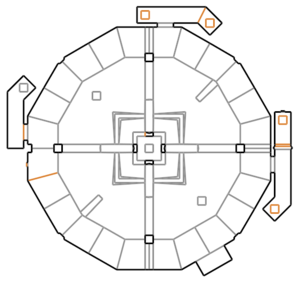 Map of The Spiral
Letters in italics refer to marked spots on the map. Sector and Thing numbers in boldface are secrets which count toward the end-of-level tally.

Doomguy starts in a niche at the bottom floor of the main spiral room. Upon revealing himself, Doomguy must immediately kill an onslaught of monsters consisting of mancubi and imps on the floor surrounding a large, sacrificial monument of some sort, and numerous imps, nightmare imps, mancubi, and Hell knights around the spiral itself. There is also a Hell knight inside a wall cage half way up the spiral which can be dispatched. There is a generous amount of rocket and shotgun shell ammo on the floor along with health and a rocket launcher perched on a vertically oscillating pillar.

Once Doomguy scales the spiral and reaches the top, cacodemons and pain elementals will appear. Doomguy's best option is to use the BFG or Unmaker, but if energy is not available, the rocket launcher will have to do. There is a switch on the wall at the top of the spiral that Doomguy will have to activate. This opens a niche approximately half way back down the spiral. This niche gives Doomguy access to the red door and a teleporter which transports him to another niche where an imp lies in wait. Doomguy kills the imp and as he passes the open window, a trio of pain elementals appear in the main spiral room. Doomguy should then go through the next teleporter, which transports him to the top of the monument where he can find the red skull key, and this triggers the appearance of numerous imps and nightmare imps along the spiral once again.

* The vertex count without the effect of node building is 266.