MAP19: The War Rooms is the twentieth map of Hacx. It was designed by Adam Williamson. 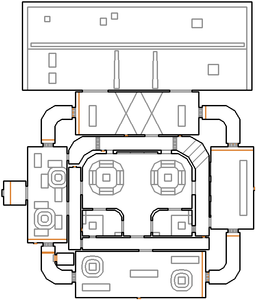 Map of The War Rooms
Letters in italics refer to marked spots on the map. Sector, thing, and linedef numbers in boldface are secrets which count toward the end-of-level tally.

As soon as the level starts, run forward to collect a super kevlar vest and tazer that you can use to kill the thugs and androids around you. Enter the south-west office and press switch #1 next to the desk, then go into the opposite office and pass through the open doorway in front of you to enter a hallway with some more androids. Follow the hallway to a set of bars and flip switch #2 next to them, then go back to switch #1 and pass through the now-open doorway here to enter another hallway with some more androids. Go to the end of this hallway to flip switch #3, then go back to switch #2 and pass the open bars here to get to another set of bars that have switch #4 next to them. Head back to switch #1 where another set of bars have opened and pass through them to find yet more androids guarding switch #5, which will open the bars next to switch #4.

Take the stick in the middle of the room if you need it, then press the button on the south wall to open the final doorway at the west end. Pass through this doorway and kill one or two more terminatrixes, then approach the last set of bars - they will open automatically, along with a compartment in the west wall that holds a mechamaniac. Destroy it then approach the door it was guarding to end the level.