MAP19: Unbaited Vicar of Scorched Earth is the nineteenth map of the second episode of Back to Saturn X. It was designed by Richard Frei (Tarnsman) and uses the music track "Kashmoney Temple," composed by Xaser. In the official add-on version, this level's name is Kashmoney Temple, taken from its track title. 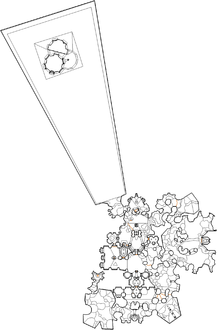 Map of Unbaited Vicar of Scorched Earth
Letters in italics refer to marked spots on the map. Sector, thing, and linedef numbers in boldface are secrets which count toward the end-of-level tally.

The final fight at the exit area can be cheesed. Open the blue door, make a step inside, and right after the walls start lowering, rush to the elevator that brought you to this room from the starting area. If you are fast enough, you can reach the elevator before the spiderdemon spawns and blocks your way. Then you can follow to the lava pool behind the blue key ledge to reach the elevator where the backpack was. This way you can approach the final arena from the east; flying enemies can't fly over the railing, so you are safe there. This vantage allows to kill enemies from the distance; or else use the monster infighting for your benefit.

Two archviles sometimes fail to spawn on this map, so it may not be possible to get 100% kills.

* The vertex count without the effect of node building is 3984.