MAP19: Undersea is the nineteenth map of 1994 Tune-up Community Project. It was designed by Dragonsbrethren based on Undersea by Brian Plumb and uses the music track "Adrian's Asleep" from Doom II. It takes place in a corrupted UAC oceanic base on Earth. 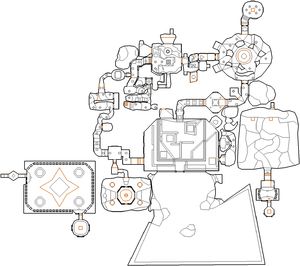 Map of Undersea
Letters in italics refer to marked spots on the map. Sector, thing, and linedef numbers in boldface are secrets which count toward the end-of-level tally.

* The vertex count without the effect of node building is 3452.

This tune-up was designed to improve upon the underwater setting of the original UNDERSEA.WAD, utilizing vistas of the seafloor instead of the original's water-textured ceilings in cavernous areas. The corrupting influence of Hell was also emphasized, with the player even briefly teleporting to a castle in Hell to obtain the yellow skull key.