MAP19: Undervault is the nineteenth map of 2048 Unleashed. It was designed by Captain Toenail and uses the music track "GloomKeep" by David Shaw, originally used in Memento Mori II. 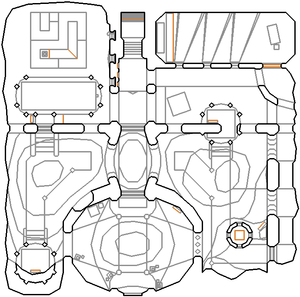 Map of Undervault
Letters in italics refer to marked spots on the map. Sector, thing, and linedef numbers in boldface are secrets which count toward the end-of-level tally.

Turn left if you want to collect a shotgun then drop down to ground level and head west through a doorway guarded by two zombiemen. Turn right and follow the path past some imps and shotgun guys until you pass through another doorway, then keep heading north until you come across a fence maze guarded by a revenant and two Hell knights. Enter the fence maze through its north-west corner and follow the path until you reach the red skull key sitting on a pillar which will lower as you approach. Make sure to collect the super shotgun and armor before leaving the maze, as an arch-vile has appeared in the doorway you used earlier.

As soon as you leave the maze turn left and head due south to another doorway; just before you reach the doorway turn left to find a satyr switch which will open a set of bars back in the starting room. Return to the starting area and head east through the now-open doorway (watching out for a revenant ambush) then turn left and follow the path north past demons and shotgun guys until you reach another doorway. The area behind the doorway is guarded by a number of zombies, imps and demons, including some chaingunners on raised ledges - enter the area and turn right, then turn right again to find another doorway through which you can see an arachnotron guarding a gargoyle switch. Press the switch then return to the starting room to find that a wooden bridge has risen across the room.

Use the stack of crates next to the bridge to climb up to the start point then cross the bridge to a sealed door, which you can open by turning right and dropping down to a ledge with a lion switch. Kill one or two mancubi waiting behind the door then turn left and run west to jump across to a stone walkway with imps and a knight. Look south to find a mancubus guarding a lion switch at the top of some steps, press the switch then head north through a now-open door (two revenants will teleport in near it) to find two or three cacodemons guarding the yellow skull key. Backtrack to the chamber north of the starting area and run east this time - you will jump to another stone walkway that has two imps and a knight on it.

Head north into a chamber with a brown square floor to find three imps guarding a gargoyle switch, press it then follow the walkway south until you go round a brick tower and through an open door. Kill the revenants waiting around the next corner then follow the passage until you reach an arachnotron guarding another door, which you can open to enter a dark room with four spectres who are guarding the blue skull key. Take the key and kill some more spectres that teleport in behind you, then leave the room and turn right to see one or two mancubi at the other end of a stone bridge. Cross the bridge to find three switches that require the three keys and will open the doors next to them revealing two barons of Hell.

Use caution when pressing the switches as imps, shotgun guys and revenants have teleported in from the starting point, and they will be joined by a cyberdemon when the final switch is pressed. Kill the barons and head into the dark tunnel behind them to finish the level.

A rocket launcher can be found in the south-west corner of the level, while a chaingun can be found by the east doorway leading to the fence maze.

A chainsaw can be found behind a large crate in the blue key room.

* The vertex count without the effect of node building is 1260.