MAP19: Warheros is the nineteenth level of Eternal Doom. It was designed by Chris Couleur and uses the music track "Psychopathic Evil". 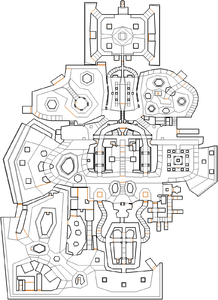 Map of Warheros
Letters in italics refer to marked spots on the map. Sector numbers in boldface are secrets which count toward the end-of-level tally.

The level is large and non-linear; however, there are no required switches that are particularly hard to find so you shouldn't get stuck as long as you keep an eye out for switches, and look for new areas that have been opened. All of the important switches usually grant access to a large and/or important new section. The exit teleporter is a fake the first time around - simply go through it again to leave.

* The vertex count without the effect of node building is 2371.