MAP20: Bony Encounter is the twentieth map of 1 Monster. It was designed by Kristian Aro.

Like all maps in the megawad, the map features only one type of monster, in this case the revenant. It is set in a brick scenery somewhat reminiscent of MAP14: The Inmost Dens. 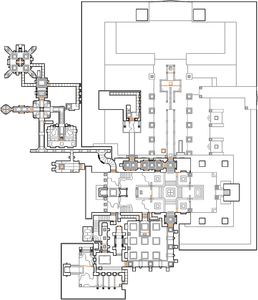 Map of Bony Encounter
Letters in italics refer to marked spots on the map. Sector, thing, and linedef numbers in boldface are secrets which count toward the end-of-level tally.

Grab the items, including the super shotgun, and press the switch that will rise to the west. Revenants will teleport in, so quickly run to the southern door which has now opened. Head forward, along the ledge, and into the next room. Go up the stairs and keep going forward; at the end of the outdoor area, press the large skull switch that will appear. Go back into the previous room. Bars have now risen; press the lion switch at the end. This opens a nearby door. Head in - a wall will rise to the north, revealing a rocket launcher - and down the stairs, then go outside. Climb the stairs and open the door to the south. Press the lion switch.

Go back to the beginning of the level. The northern door is now open. Head through and grab the red key at the end of the area. Head again to the outside area where you climbed the stairs previously, and open the red key door to the north. Head in, grab the radiation shielding suit, and keep going forward until you come to a room with two blue skull symbols. Go up the stairs and press the switch. Head back to the river of acid; a door has opened in the southern wall, behind which is the blue key.

You now have two possible routes. You can go back down the river into the room with the blue key door to the north. Or you can use the nearby teleporter to head back to the beginning area, where there is a blue key door; head in and keep going forward, and you'll find some goodies on your way. Either way, you'll end up in the same room, with two burning red torches and four passages on four walls. Both the north and the west passage will lead you to the same large lift. Wait for it to rise and press the switch to the west. It will reveal a switch in the south-east corner; this one reveals another switch in the opposite corner, and so on. Once four switches in four corners are pressed, you can get the yellow key. Head down a passage to the north and press the switch there to lower the lift and let you leave. Go back to the room with two torches and leave through the blue door here. The yellow door is next to you. Open it and head to the exit.

* The vertex count without the effect of node building is 6020.

In the map's first versions, the beginning of the level was much harder, as it had more than one revenant hiding behind doors in the first area.