MAP20: Breakdown is the twentieth level of Doom 64, designed by Randy Estrella. One of the most disturbing maps, large portions of this level shift and change completely, disorienting the player and making navigation difficult. It uses the music track, "The Rotted Foul". 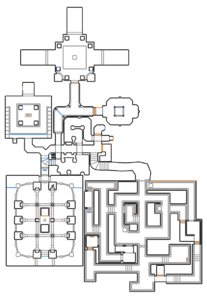 Map of Breakdown
Letters in italics refer to marked spots on the map. Sector and Thing numbers in boldface are secrets which count toward the end-of-level tally.

You begin in a courtyard-like square containing thick large stone columns in the center and an upper level that surrounds the square. In the very center of the square sits the blue skull key on top of a pillar that can only be brought down by shooting at a switch on one of the surrounding columns from the upper level. Many sergeants and cacodemons lurk throughout the square along with imps on the upper level. There are two switches located on two different columns opposite one another. Shoot the wrong one and a pair of cacodemons will appear which you will have to fight before shooting the other one. Once activated, the pillar with the blue skull key will lower to the ground. Collect the key, then activate the blue switch to advance to the next section of the map.

The next section is a blue stone corridor. From the courtyard square entrance, turn left and then right to drop down into a green room which will open in the middle to reveal a switch and a couple of Hell knights and nightmare imps to fight. Then hit the switch and go up the newly activated stairs, collecting the mega armor powerup along the way, then momentarily go to the back wall of the room to enter a secret alcove that contains a cache of rockets and a backpack. The switch activates a staircase which permanently blocks off the courtyard square and takes you to an upper level of the corridor which is more extensive. Many sergeants lurk here and you have to fight through them all in order to reach the end to activate a switch which opens another section of the upper level corridor. Make your way there and take out the spectres and baron hiding around the corner. Then go into the door to the left of the yellow door which takes you into a large open room with the red skull key resting in a pit in the middle. Take out the Hell knights on both sides of the door and then collect the key. Immediately the pit will raise to the level of the rest of the room and you will have to be ready to fight an onslaught of demons charging at you from every direction. There are three large sections connected to the room which house health bonus potions, which will help keep you alive as you slaughter the horde of demons until they are all killed and their corpses disappear. Exit out of the room and go back downstairs and go right down the hall, then left to open the red bars blocking the switch you need to activate to open the final portion of the map.

The final section of the map is a large labyrinth of red stone infested with sergeants, imps, nightmare imps, Hell knights, barons, and lost souls. Navigate the labyrinth and kill them all. It will take some exploring find the switches that will help you navigate to the upper level of the labyrinth to collect the yellow skull key (to explain the exact routes would be confusing in text). After you collect the yellow skull key, you will have to dispatch a group of lost souls that appear and hide around some corners. Then exit the labyrinth and head for the yellow door located near the large room where you collected the red skull key. Inside the yellow door is an elevator which brings you down to the final room infested with nightmare imps. Kill them all and then jump into the small pit to exit the map.

In the labyrinth, there are two additional secrets:

"In the room with the final hidden switch on a column, it fired a series of Darts from the distant wall you were facing when the switch was triggered that were setup in a pattern with initials and a heart in between. A love note, at the time, basically."
―Tim Heydelaar [2]