MAP20: Castle Bloodletting is the twentieth map of NOVA: The Birth. It was designed by Collin Pierce (Arjak) and uses an untitled music track by nub_hat. 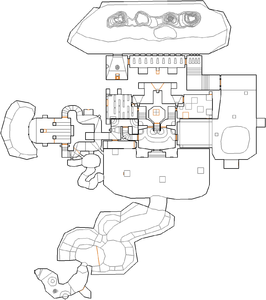 Map of Castle Bloodletting
Letters in italics refer to marked spots on the map. Sector, thing, and linedef numbers in boldface are secrets which count toward the end-of-level tally.

A number of multiplayer-only items have no flags set for any of the three difficulty classes, so they do not actually appear in the level: a chainsaw (Thing 663), a backpack (664), a super shotgun (668), a box of shotgun shells (669), and an armor (671). Additionally, a deathmatch start (656) has no skill flags, but because of special handling in the engine, it functions normally.

* The vertex count without the effect of node building is 2879.