MAP20: Central Processing is the twentieth map of TNT: Evilution. It was designed by Drake O'Brien and uses the music track "Horizon" by Tom Mustaine exclusive to this level.[1] 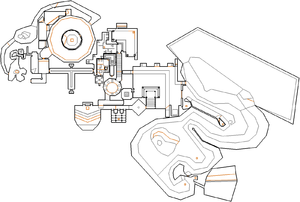 First, take the super shotgun ahead and eliminate everyone in this room. Avoid the red pit on the floor, as it hurts. There are two doors in this room (silver ones; with UAC logo on them). The western one requires the red key. Proceed through the eastern door, as you do not have the key yet. The door will lead you to a large office area. You should find a teleporter which is located in the northeast of the office. Proceed towards northeast by walking around the computer walls. Once you find the teleporter, enter it and you will be located in the cargo room with the red walls. There is also a former human right behind you. Eliminate it and the other ones here. Collect everything you wish and leave this room through a small silver door.

You are now back in the office area. Head to the east. You should discover the other room which was closed before (this is now opened because you have visited the red wall cargo room). Turn right and enter a tall room which has tan walls. Should you enter in, the stairs will rapidly build up. Rise up. You will glimpse a room with a large tall silver pillar. Turn left and notice a fiery lever. Turn it and the pillar will lower giving you access to the other side (in case, if you have hopelessly fallen down, you still can lower this pillar manually by pressing use on it). Kill the monsters on the pillar and collect some items, including the plasma gun. Go to the next room with tan walls. On the right you can see a lowered lift. Step on it to raise it up. In the silver corridor, turn right and kill a zombieman. Step on the dais and the wall will open revealing a large room with steps on your left. Right in this room there is the red skull key. Eliminate everyone there and walk up on the stairs. Take the red key.

With the red key you need to go back to the starting room. It is advisable if you use a shortcut to that room: in the silver corridor, go to the opposite side. A room with the yellow skull bars will be in your sight. Because you do not have the right key yet, the only thing you can do is to destroy everyone in that room. In the corridor, you can see three pairs of lamps that accompany compartments with the armor bonuses. They lead to one room which should be revealed. Visit this room and kill the enemies inside. Collect the berserk pack and enter the teleporter which is the shortcut.

Now at the starting room, you can open the red door in the west, but be careful: two small rooms have been opened ahead and behind you. They both contain monsters and also have something to collect. Open the red door. You will come to a brick room. Turn right and approach the door but do not enter it. A wall behind you will open. Destroy the enemies inside it and enter the room where they all were. You will see a fiery button (the similar one you already had to see). Shoot it and get back to the brick room. Another wall is opened. Again, kill everyone. You do not have to visit the door in the north, as it leads to a place where you will need a blue keycard, which you do not have. Enter the second brick room and visit an alcove in the northwest of the room. Proceed on the rather linear tunnel. On your way you will find a radiation suit which will protect you while you will be walking on the slime and nukage. Wear it. Proceed further until you can drop down to the nukage pool. Shoot everyone here, but be quick: the suit is for the time limit. Turn left in this cave and collect the blue keycard (if you did not notice the card, that means that you are playing the skill level below Hurt Me Plenty and you will find the card later). In this cave, open a small metal patch to get out.

In the grey rock room, go northwards to a metal lift. Lower it to get higher. Enter the lava cave. Collect everything you wish here. Go on the path north. Take an invulnerability sphere if you want or spare it for later. Go to the end of the tunnel until you meet a wooden panel. You can also see a blue keycard here if you are playing on the skill level below Hurt Me Plenty. Collect it in this case.

Open a wooden panel to get to a circular room.

In the circular room, open the blue door in the center structure. In the room, walk around the silver panel. This panel should lower now. Get the combat armor in leave the room back to the nukage room. In the north of the room there is an alcove in which there is a third fiery button. Shoot it, and the wall on your left will open (you could open this wall manually; it just makes no sense). In the next room with brick walls, find a yellow skull key.

With this key get back to the area where you found the red key and likely yellow door, but first kill the crowds of enemies.

Accessing the outside area; exit

Get back to the starting area and take the silver door in the east again. In the office area, go to the east. Walk up the stairs in the tan room. Visit the second tan room in the south. Use the rising and lowering lift up to the silver room. Go to the room in the eastern end and open the silver wall requiring yellow key.

You are now in the first outside area. First, walk down the stairs. To get to the other side, you need to drop down into a river and enter an alcove either in the west or south. This will spawn you on one of three sections in the north of the area. Carefully, drop down. If you want to get back to the first side in order to collect something, drop down into the second river and enter any alcove. Enter the wooden door which leads to the second outside area.

Turn right and enter a narrow space between rock and the brick. Enter the teleporter. You will be spawned on the top of a hill which is fenced. Collect supercharge and drop down through the wrecked piece of the wire fence. Drop down to the water. Find a silver teleporter to get back to the familiar entrance of the outside area. This time, walk up the stairs. At the end, lower the metallic patch as a lift. Step on it and wait until it rises. Drop on the ground higher, then the stairs. Proceed down the linear path towards south until you meet a silver teleporter on your right and a small step on your left. If you choose the teleporter, you will be spawned three times to the various places in the level where you can collect items and eventually come back to this point. Anyway, choose to go left. Again, proceed down the linear path, this time towards northeast, until you meet floating skulls. Touch this decoration or approach and the lift will lower before you. Use the lift to get to the highest point of mountains. There, find a ripped barbed wire. Drop through it and you will be on the white rock level. Do not jump down here, as you will have to repeat the steps to get here again. Turn left and proceed the linear path towards south until you meet the red teleporter. Enter it and you will be located on the raised platform with the exit. Press use on the exit sign to finish the level.

You may be under the risk of getting stuck permanently if you straferun from the BFG's pedestal into the barred corridor in secret #2 before you have shot the gargoyle face. The gate in the north can only be lowered if you have the Super Shotgun and ammunition for it since it is the only weapon of which shots can reach the ledge where the face is. In case you do not possess the previous, you can only load a saved game, kill yourself to restart the level or use the no clipping cheat to make an escape. (This is naturally not the case when playing in a source port that allows the player to jump or aim more freely.)

An energy cell pack (thing 511) is located outside the map.

* The vertex count without the effect of node building is 2062.

This level shares its name with E1M6: Central Processing in the original Doom.