MAP20: Charnel's Cellar is the twentieth map of Plutonia 1024: The Plutinya Experiment. It was designed by Michael Fraize (Marcaek), and the par time defined in MAPINFO is 2:30. 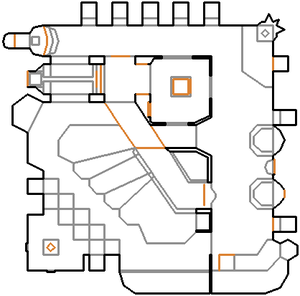 Map of Charnel's Cellar
Letters in italics refer to marked spots on the map. Sector, thing, and linedef numbers in boldface are secrets which count toward the end-of-level tally.

Take the armor and shotgun to your left, then drop off the platform and follow the west corridor until you reach a gargoyle switch, which you can press to lower a platform with a super shotgun. After getting the weapon, look east to see two more switches, one lit and one unlit - press the lit switch to raise the platform, kill any chaingunners waiting in the east chamber then walk round the metal block in this chamber to find another switch that will raise a bridge outside. Kill a cacodemon that emerges from the block then return to the platform and head south along the bridge you just raised, passing a Hell knight that blocks your way to the yellow skull key. Taking the key will lower the walkway you are standing on, revealing an arch-vile to your left on HMP or higher - two columns ahead will also lower, revealing knights on Hurt Me Plenty (HMP) skill level or lower or barons of Hell on Ultra-Violence (UV) and Nightmare (NM).

Go back round to the gargoyle switch on the north side and press it to lower the super shotgun platform again, then open the yellow key door on your right to reveal a second switch behind it; this switch will lower the wall and reveal imps and shotgun guys (plus a revenant on HMP or higher) protecting a berserk pack, but it will also lower a platform to the north which holds the blue skull key. After taking the key, return to the platform and press the lit gargoyle switch again to go back to the upper floor. Enter the east chamber and open the blue key door in the south-west corner to reveal one more switch, which will lower the pillars in the south-west corner of the map and reveal an arch-vile (plus imps on HMP or revenants on UV and NM) along with the exit teleporter.