MAP20: Desert Temple is the twentieth map of Deus Vult II. It was designed by Huy Pham (Doom Marine) and uses the music track " ". The par time defined in MAPINFO is 2:30. 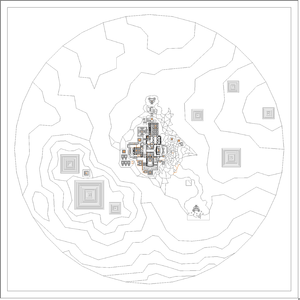 Map of Desert Temple
Letters in italics refer to marked spots on the map. Sector numbers in boldface are secrets which count toward the end-of-level tally.

Suicide Exit: In Secret #3, if you die so you slide between the two red torches, you can exit the level.

* The vertex count without the effect of node building is 5646.