MAP20: Eddy DM is the twentieth map of 32 in 24, a deathmatch megawad. It was designed by EDEdDNEdDYFaN.

It was the twenty-third map to be submitted, arriving nineteen and a half hours into the session. According to the author, it took half an hour to build, and was their first completed level. 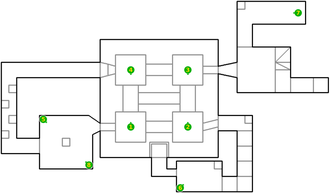 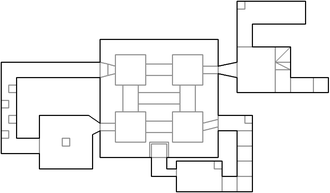 Eddy DM is a small marble-themed level. The centrepiece features four square platforms connected by narrow walkways. If players fall off, they find themselves in an inescapable lava pit, but by what appears to be an oversight, this lava is not damaging, so players that fall off are stuck until they are killed by another player. A shotgun is at the centre of this area, and each of four square platforms hold a green armor and a player spawn, with a megaarmor on the southern walkway, a medikit to the north, and a shell box on the west and east walkways.

The north-east room contains some individual rockets, with a rocket launcher and a soulsphere in the corner. Note that the lava floor that the soulsphere is on is damaging; dealing 10 damage before armor. A small passage in the north of this room leads to a shotgun and another box of shells. Another green armor can also be found here, but will like have been taken by the player that spawns on top of it.

The south-east area starts with a staircase containing a chaingun and a large supply of ammo, with a total of 150 bullets and 60 shells. At the top of the stairs is a small room with just a medikit in a corner, and possibly a green armor if it has not been taken by another player spawn. This room leads to a small balcony overlooking the central area, where players can find a super shotgun. It is not possible to jump over the balcony down to the central area, so the player must return the way they came in order to leave.

The western area has two entrances from the centre. The southern entrance leads to a square room with a plasma gun in the middle. The corridor that leads off of this room contains some energy cells, and marble pillars which function as obstacles, before leading back out to the central area.

This level contains eight spawn points. At first all spawns will give a green armor, however subsequent spawns will not give armor if it has not yet respawned.

* The vertex count without the effect of node building is 154.