MAP20: Enigma is the twentieth map of Community Chest 2. It was designed by Ian Cunnings (The Flange Peddler), and uses the music track "Sign of Evil" from Doom. 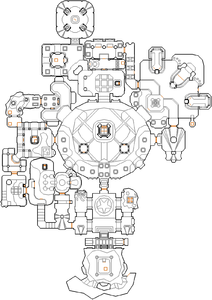 Map of Enigma
Letters in italics refer to marked spots on the map. Sector, thing, and linedef numbers in boldface are secrets which count toward the end-of-level tally.

Go right and go through the door straight ahead. This big room is reminiscent of the open area of E3M7: Limbo from Doom. You can go left or right at this point. Elect to go right and follow the path taking the lift down. The switch on your right changes the landscape of the big room. Go back there and part of the damaging blood here will be elevated downwards revealing new areas. Go to the right hand side of the big room and drop down slightly, grabbing the plasma gun and pressing the eye switch here to reveal a new area. Here you can get the red skull key. You may need a radiation suit for this area as it is surrounded in blood.

Back in the big room, take the left door without dropping down anywhere. In this next room, go south to the next room and continue until you see the yellow key. Go down and press the switch to open the bars so you can come back here later if need be, then go towards the block north of where the key is, it holds a teleporter. Press the switch on the other side, then return to the big blood room again. Go all the way down and north and a passage should be open towards the blue key. You will have to fight four barons of Hell and wait about thirty seconds when you grab the key. When the bars raise, leave and head towards the blood to another small closet with a teleporter which takes you back to the star-shaped platform before the big room. Turn left and open the door. Go right to the blue door and you should be able to take the yellow key. Go up the lift nearby and head up to where the yellow switch is, it raises nearby bars so you can hit another switch to bridge your way to another teleporter. Go through the field and hit the next two switches and leave, looking out for walls of zombiemen along the way. Use a teleporter and head back to the big room. There should be a bridge connecting to the middle where the red skull door houses the level exit.

Because of a teleporter being too high to reach, you can only get 80% Secrets outside of pre-2.4.0 versions of ZDoom and source ports based on them.

It is possible to skip the bars opened by the yellow key (sector 216) with a strafejump (see Routes and tricks), and gain access to the switch raising the exit bridge (linedef 1687) before you are intended to. However, if you then lower the water level of the blood (linedef 2964) to open access to the red key that will open the exit, the exit bridge will drop with it. Because linedef 1687 is one-time-use only, this will render the level unwinnable.

On sector 211, it is possible to do a strafejump northeast past the bars opened with the yellow key by jumping from the western section of the walkway to the northern one (from linedef 2267 to linedef 2286). This allows you to skip obtaining the yellow key entirely, but beware: doing so before changing the water level of the blood can make the level unwinnable (see Bugs).

* The vertex count without the effect of node building is 4923.

Secret #2 relies on a bug in ZDoom's handling of the arch-vile's blast attack, in which the attack's blast radius was erroneously used as its thrust value due to references which were off by one. Thus, the player was launched by the arch-vile's attack much higher than normal. The bug was fixed in commit r1745, made on August 1, 2009 and consequently included in version 2.4.0 (released on January 1, 2010), restoring the blast's original behavior and preventing the secret from being accessible without cheating.