MAP20: Eternal Void is the twentieth map of Simplicity. It was designed by Melissa McGee (Agent Spork) and uses the music track "Mist Ache", originally created by Lee Jackson for Rise of the Triad. The par time defined in MAPINFO is 10:10. 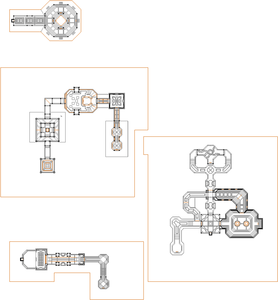 Map of Eternal Void
Letters in italics refer to marked spots on the map. Sector, thing, and linedef numbers in boldface are secrets which count toward the end-of-level tally.

Use the super shotgun to kill one or two Hell knights then try to open the skull door, which will fade away to reveal a couple of demons. Head north to a square with four portals (currently closed) and slay the imps here, then head round to the north side of the square and kill some cacodemons that fade in to lower a barrier on the north side. Head north and kill some demons that teleport in as you go round the corner, then continue on to a brick building and kill the imps, demons and knights that rise from the floor. Head up the steps at the back of the room (the game will autosave here) to see a satyr switch between two screens, but do not approach it yet as a forcefield will push you back and injure you; instead, kill two demons that have appeared on a bridge to the east and cross it until you see the walls on either side rise to reveal two cacodemons. Kill these enemies to open the way forward and go through to face two knights guarding a backpack, then press the satyr switch on the wall to open a second bridge.

Kill two barons of Hell that appear ahead then go to the end of the bridge to find another satyr switch, which will disable the forcefield you encountered earlier but will also cause more cacodemons to fade in. Kill them all then go back to the forcefield chamber and collect the rocket launcher here before pressing the satyr switch; you will see the bars in front of the west portal lowering on the screens. When you approach the west doorway it will be sealed by a flame wall and you will need to dispose of two arachnotrons as well as two mancubi that appear in the nearby cages. Once the flame walls disappear, return to the portal area and walk through the west portal to reach the south area.

Kill the imps and demons ahead then open the wide door they were protecting - the game will autosave and you will see an arched path guarded by mancubi as well as some caged imps. Follow the path until you go down some steps, kill the imps and arch-vile that fade in ahead then follow the bridge round the corner to find a plasma gun along with another satyr switch, which will open the north portal back at the square. Retrace your steps back to the start of the area and step into the portal to return to the square, then head through the north portal to go to the east area; arm yourself before stepping through as several imps and demons will be waiting on the other side.

There are three doorways leading away from this area. Go through the west doorway and kill the knights that appear ahead, then head west and south up two sets of steps to a satyr switch which you can press to summon a mancubus; now go back to the entrance room and pass through the east doorway, kill the imps and knights that appear around the pit ahead then walk round it to find a lion switch. Pressing both switches will lower sets of bars blocking your way to the north side of this area, but will also allow two barons to teleport in - kill or avoid them then follow a skull-floored hallway north and west to a crossroads, then walk north until your screen flashes red and you see imps, demons and knights appear ahead. Head east or west to a staircase and climb it to a platform with a flesh column, then press the satyr switch at the south end to open the east portal in the square.

Pressing the satyr switch will raise bars to block your escape routes; kill a baron and two knights that appear to make the bars lower again, then go back to the entrance and step through the portal to return to the square. Head through the east portal you just opened to reach the north area on the map, take any supplies you need then head straight forward to a metal column surrounded by four switches - after flipping the final switch, the column will lower to reveal the chaos elemental. The game will autosave at this point.

The chaos elemental is a fast-moving opponent that fires pairs of highly damaging green fireballs; it also has a special attack where it teleports around the outside of the arena in a clockwise pattern, launching fireballs on each teleport, before returning to the center - do not shoot at it during this attack as it will be invulnerable, and it can telefrag you when it re-enters the arena. As the elemental takes more damage, it will launch more fireballs at a time and can command flamethrower walls to rise from the pits. Never stop moving and keep your distance from the elemental as much as possible, as its fireballs are almost impossible to avoid at close range; it is possible to avoid the attack by standing perfectly still when it fires. Once the elemental dies, the center of the arena will change to a blood pit and you can step into it to end the game.

* The vertex count without the effect of node building is 5400.