MAP20: Factory: Receiving is a level in Strife. It uses the music track "Dark".

The Strifeguy passes through the receiving area while searching for the conversion chapel being used by the Order to turn civilians into its soldiers. Later, Strifeguy returns to the receiving area to find a way into the factory's manufacturing wing where he hopes to find the final piece of the Sigil. 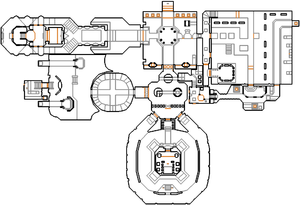 Map of Factory: Receiving
Letters in italics refer to marked spots on the map. Sector, thing, and linedef numbers in boldface are secrets.

If you have entered this level from the commons, open the large door in front of you to find a crossroads. Kill the reaver behind the pillars ahead (or two on Elite or Bloodbath skill level) and turn right (west) at the junction to enter a stone structure. Head on towards a red Order banner and take either staircase down, then follow the passage until you reach a silver door. Go through and down the steps to a lift which leads to a large silver door. Before approaching it, look left or right and kill the two templars waiting in ambush, then go through the door to the conversion chapel.

If you have entered this level from the mines, open the door in front of you and go around the metal barrier, watching out for the two crusaders in the area. Go down the steps here and through the doorway ahead. Go down either of the curved staircases and through the doorway at the bottom, then turn the switch on your left to open the metal barrier here. In the next room, turn left and walk past the pillars, turning the switch at the north end of the room to open the large metal gate. Head though it to reach the crossroads; turn left at the junction to find the path to the conversion chapel, then follow the directions in the paragraph above.

After slaying Macil, you will return to this level en route to the factory's manufacturing wing, which can be reached from a room south of the crossroads. If you first entered this level from the mines then you will have opened the gate between the crossroads and this room already, otherwise you will need to find another way round.

Go east from the crossroads and cross the platforms to a doorway, then open the door straight ahead. Destroy the crusader ahead and run east across the platforms, jumping across a trench to the ledge where the crusader was and then across another trench to a lift. Head over the water stream and then look right to see a pipe with a valve. Turn the valve to lower the water level and drop into the river, then head south and follow the water's course through a tunnel, watching out for any stalkers and sentinels lying in wait. At the end of the tunnel, climb the steps and use the lift ahead of you to go down to a lower floor, dispatching the acolyte and templar here. Go north up another staircase, turn left and drop into the room south of the crossroads. Press the switch next to the north door to permanently open it.

The path to the manufacturing wing can be found past the metal bars at the south end of this room; if they have not opened, there is a walkover line just past the metal gate to the west which will open the bars once the converter in the conversion chapel is destroyed. Head south through the bars, destroying two crusaders here on Elite or Bloodbath. There are three doors here, but go through the left or right doors and follow the passage round to the south side, destroying any stalkers and crusaders in your path. At the end, step north through a doorway and throw both switches here to raise the bridges. Head back round to the room with three doors and go through the south door this time, destroying the reaver behind it. Cross the bridge and go through the door at the end, then approach the lift to enter manufacturing.

The north-east part of the level has a rectangular outdoor area that is guarded by crusaders and reavers. In the area's southwest corner, there is a room that is protected by bars and walls. To access it, enter the door on the southern wall of the outdoor area. The door is located in the passage below the main level, and the bridge near it can be operated as a lift. Press the switch in front of the peasant. Return to the passage and use the lift to get back up. A door has opened in the corridor that runs behind the western wall of the area. Go beyond the door, where you can access the barred room. The following items are stored there:

One med patch (Thing 348) is unreachable due to being placed behind the walkover line that teleports you to MAP21: Factory: Manufacturing. The Veteran Edition changes this item to be multiplayer-only, so it no longer appears in single-player games.

In the middle of the level, sidedef 1749 lacks an upper texture. As a result, the adjacent pipe flat is drawn over the section that is 64 map units high.

* The vertex count without the effect of node building is 2555.