MAP20: Fear of the Dark is the twentieth map of Hell Revealed II. It was designed by Martin Friberg and uses the music track "Winds of the Destiny," by Petter Mårtensen (Thyrbse). 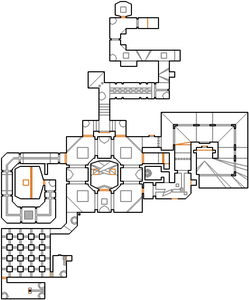 Map of Fear Of The Dark
Letters in italics refer to marked spots on the map. Sector, thing, and linedef numbers in boldface are secrets which count toward the end-of-level tally.

In the hub, get the super shotgun from the pain elemental and head through either northern door. Follow the path, killing chaingunners, shotgun guys, and imps. It would not be a bad idea to open the door along the way, for a rocket launcher is inside. At the end of the path you will get the yellow keycard, but watch out for enemies as you head back to the hub. There are two yellow doors, the one leading to the middle has a few good supplies, but you will come back here later for more important items. Take the one on the eastern wall for Hell knights and a teleporter, which takes you to the southeastern corner of the hub. The wall will lower, now head through the center yellow door to find the red keycard is available. Take it, and kill the cyberdemon that appears in the hub. The red door is to the west, take it and again, follow the path all the way around, killing various monsters. When you reach the room with chaingunners and a revenant, step in to reach the southwestern corner of the hub. Again, the wall lowers, and you should return to the center to find the blue keycard (and an arch-vile). After taking it, kill the next cyberdemon that appears in the hub, then take the blue key door to the south and east. Like all other paths in the level, follow it around, but look out for some teleporting enemies back in the hub just before you take the path. At the end, flip the switch, but be prepared to fight masses of former humans and imps. There is also a pain elemental to the northwest. Kill him and flip the switch here to lower the wall in the northeast corner of the hub. You will also lower the wall in the southwest corner of the hub, and behind it is a long passage which leads to a room with several square columns. Head for the southwest corner of the room and kill the enemies inside, then flip the switch. Head back and then to the southeast corner to find the exit teleporter. 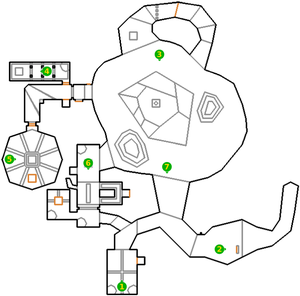 * The vertex count without the effect of node building is 1766.