MAP20: Floréal is the twentieth map of MAYhem 2018: Orange Edition. It was designed by Roofi and uses the music track "Danger in the Forest," originally composed by Nobuo Uematsu for Final Fantasy IX, sequenced to MIDI. 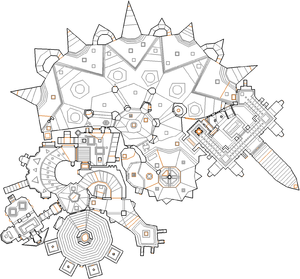 Map of Floréal
Letters in italics refer to marked spots on the map. Sector, thing, and linedef numbers in boldface are secrets which count toward the end-of-level tally.

* The vertex count without the effect of node building is 5930.

Floréal is the eighth month of the French revolutionary calendar, corresponding approximately to the last third of April and the first two thirds of May in the Gregorian calendar. Its name evokes the blossoming of Spring flowers.