MAP20: Ganymede Outpost is the twentieth map of 10 Sectors. It was designed by Tarin and uses the music track " ". 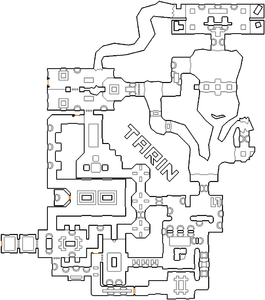 Map of Ganymede Outpost
Letters in italics refer to marked spots on the map. Sector numbers in boldface are secrets which count toward the end-of-level tally.

There are a number of paths you can take at the beginning. To progress with the map, go with the path going east, going northeast as much as you can through an outdoor section to the northeast corner of the map. In this room, head west through another outdoor section. Once you head back inside, you should be in the northwest part of the map, where a red switch and a blue key reside. Take the key and backtrack, going to the far southeastern reaches of the map. A chaingun is here if you did not take it before. Open the blue door and keep going until you see a switch. This will lower the blue bars in the map. Look out for imps and Hell knights as you make your way back to the big outdoor section.

The blue bars blocking access to the yellow key should now be gone, so take the key, which is close to the northwestern corner of the map. Backtrack again, this time to the starting point, and take the paths to the west. From there, go north, all the way until you find a yellow switch. Press it to open the nearby yellow bars, then make your way over there (from the starting point, take the northeast path, and continue north). The red key is just behind these bars. Unfortunately, you will have to backtrack the long way to the red switch which you remember seeing when you got the blue key. After you reach it, hit the switch and head south looking out for teleporting monsters as you go. The exit is in the western part of the map, so fight your way to it.

* The vertex count without the effect of node building is 2842.