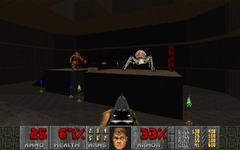 The cyberdemon and spiderdemon face each other in MAP20.

MAP20: Gotcha! is the twentieth map of Doom II. It was designed by John Romero and uses the music track "Message For The Archvile". The par time is 2:30. It is notable for allowing the player to watch a cyberdemon and spiderdemon fight. 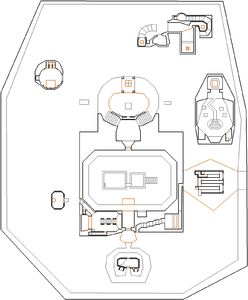 Map of Gotcha!
Letters in italics refer to marked spots on the map. Sector, thing, and linedef numbers in boldface are secrets which count toward the end-of-level tally.

Go through the door at the start and clear the opposition there. While moving into a larger room, platforms will lower in the center of it revealing the spiderdemon and cyberdemon. Try to lure them into a fight (moving in the west of the room behind a raised wall in the western platform). Defeat the remaining enemy using the platform as cover.

Hit the switch in the western platform and immediately eliminate the arch-vile and baron of Hell that will come through the door. Afterwards, take the lift to go around the walkway and go through the door. Follow a winding stairway down towards the teleporter. Go down another stairway and jump into the dark opening. Follow the corridor to the end and hop in the teleporter.

You will slowly go down into a small room with zombies and imps. Through the opening you will see a section of wall lowering across the lava pool. Wait for it to lower completely and jump through the opening. Follow the corridor, climb up the stairs and snatch the plasma gun. Watch out for enemies popping out and run down the stairs towards the walkway and walk through the teleporter. In the last room, walking through the narrow walkway until the end and jump in the hole. Watch out for chaingunners and cacodemons.

This information was last verified in its entirety on November 15, 2021.

The official French name of this level is Je t'ai eu!. Literally, "I got you!"