MAP20: High Time for Death (named "High Time of Death" on the automap) is the twentieth map of Doom 2 Unleashed. It was designed by Andrew Rehberger (Malinku) and uses a custom music track.

When using the music WAD included with this megawad, this level instead uses the music track "Meltdown" by Paul Corfiatis. 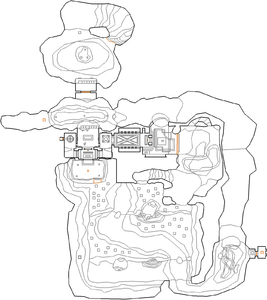 Map of High Time for Death
Letters in italics refer to marked spots on the map. Sector, thing, and linedef numbers in boldface are secrets which count toward the end-of-level tally.

Take the shotgun and chaingun in front of you then press the switch to lower two walls on your right and left, revealing imps and a demon. Turn right and go round the corner to confront three shotgun guys, then turn right again to see a room with nine imps and a Hell knight. Head through the room to find another switch next to an armor pickup - pressing it will lower the walls in front of you to reveal several weapons and items, but also reveal some shotgun guys and chaingunners behind you as well as zombiemen ahead. An alcove will also open on your left containing a backpack and other items, which will offer some cover from the monsters.

Head east through the wall you opened and take the items, which include a super shotgun, rocket launcher, plasma gun, megasphere and ammo boxes then go to the platform that the zombiemen were standing on - there are many imps waiting on the floor below, but you can flank them by going down the staircase to the north. After killing all the imps and revenants you can see, take the supercharge in this cavern and turn right again to see a staircase leading up to an arch-vile. Kill the arch-vile before it resurrects too many monsters, then climb the stairs and take the red skull key at the top.

Approach the window next to the red key to find a supercharge, a megaarmor and an energy cell pack but do not get close to the edge - a large number of monsters are waiting below including imps, revenants, cacodemons, Hell knights and barons of Hell. Drop out of the window and turn right to see a river which you can follow south and east to a cavern guarded by a mancubus and filled with more imps - if you have a BFG9000 it will be very useful in clearing a path. Once you enter the cavern, continue following the river until you reach an area with four arachnotrons then look right to see a wooden area with a door that requires the red key. Open the door and step into the teleporter behind it.

You will arrive in a room north of the start point - take the megasphere and ammo boxes if you need them then step north. The cavern ahead is filled with the same monsters you encountered outside, so use your ledge as cover and watch out for any monsters that manage to climb up the steps below the ledge. After clearing the cavern, take the megaarmor sitting in the water then head north through the door to another ledge with more ammo boxes. There are more monsters in the next cavern, including two arch-viles on the floor below and on a higher ledge to the north - as before, use the ledge you are standing on as cover from the monsters below.

Once the area below is clear, drop off the ledge and head up the stairs in the north-east corner - watch out for one to three cyberdemons that teleport in behind you when you start climbing the stairs. At the top, kill any remaining enemies and take the megasphere and energy cell packs in the north-west corner, then jump south to the yellow keycard which is sitting on a tan pillar.

Drop off the pillar and kill the cyberdemons if you have not already done so, then head up the stairs by the south wall and open the door leading back to the first cavern where another one to three cyberdemons have appeared. Kill them as well, then climb another set of stairs and head south through a doorway leading back to the starting point. Enter the room on your right and kill any remaining enemies, then open the tan door in the north-east corner (requiring the yellow key) and press the satyr switch behind it to finish the level.

After heading outside, head due west across the river then look to your right to see a narrow lift which lowers as you approach. Ride the lift up to find a megasphere and a BFG9000 as well as several energy cell packs. When you take the items, watch out for four arch-viles that teleport in around you.