MAP20: Inexorable Opposition is the twentieth map of Whispers of Satan. It was designed by Kristian Aro, and uses the music track "Churmen (A Simply Phobos E1M5 remix)" by Paul Corfiatis. 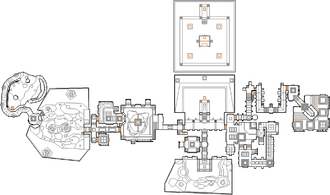 Map of Inexorable Opposition
Letters in italics refer to marked spots on the map. Sector, thing, and linedef numbers in boldface are secrets which count toward the end-of-level tally.

There are imps on the walls of the castle, so kill them if you must, and then enter the castle. To open the bars ahead, enter the door on the left. Grab the super shotgun inside to open a wall containing a pain elemental and a switch. Press it to raise the bars to the main intersection. The exit is straight ahead, but you need the yellow key. Head right at the intersection. Open the door and in the next room you will see the blue skull key on a metal pillar ahead. Kill the monsters and head for the door that is to the left of the entrance. Go through the next few doors, through the blood canal, and then enter the teleporter at the end. In the open area on the other side of the teleporter, kill the arachnotrons and mancubi, and press on the brown wall with the skull on it to lower it as a lift. Ride it up and grab the megasphere, then go back through the teleporter. Two new passages have opened up on the other side, and they both lead to the same room. A baron of Hell guards an eye switch here. Make sure you hit the eye switch, then backtrack all the way to the blue key room, looking out for demons, chaingunners, and revenants along the way. Back at the blue key room, the two doors to the south are open, so head through them. Follow the path behind them up the stairs to a switch, which will lower the blue skull key. Return to its room to find an arch-vile running around.

After you get the blue key, return to the intersection and go west through the door. Head through the hall making note of the room ahead, then take the door to the west. Behind it is a fork with the red door to the left. Just open the door up ahead and head through the valley, looking out for pain elementals as you head westward. Head through the tunnel all the way until you reach a blood pool. From there, go left towards the small niche with the shotgun shells to find some rocks leading up to a BFG9000 and a switch. Press the switch and drop down, then turn left to get the red skull key. Now backtrack through the tunnel and valley to the red door again, watching out for imps as you cross the valley. Open the red door, kill the baron of Hell, and press the switch behind him to open the bars nearby, then go through those to the next door. Climb the steps up and get the yellow skull key. Note that the room you see through the window has a cyberdemon in it now, so you might have to fight him while leaving. Back at the intersection, open the yellow gate, kill the arch-vile that appears, and exit the map.

* The vertex count without the effect of node building is 5559.