MAP20: Intruder Alert! is the twenty-first and final map of Hacx. It was designed by John Herndon. 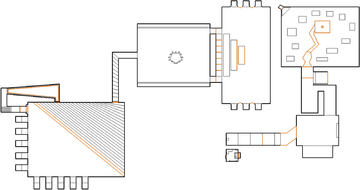 Map of Intruder Alert!
Letters in italics refer to marked spots on the map. Sector, thing, and linedef numbers in boldface are secrets which count toward the end-of-level tally.

Press the keyboard on the desk in front of you, then climb on to the desk and step into the screen in front of you to enter cyberspace. Head straight forward through a highly damaging tunnel to a wall that will open as you approach, then follow a trail of inhalers through another wall into a seemingly empty room with a super kevlar vest, a cryogun and a photon 'zooka at the opposite end - watch out for the roaming mines and D-men that come through the right-hand wall as you go for the weapons. Head north and proceed round the corner to destroy some ICEs hiding behind the wall (there is another super kevlar vest here on "Let's rip them apart!" (LRTA) skill level or lower), then walk north towards a narrow walkway over a pit, ready to destroy an android and two ICEs that are released to your right.

Grab the body armor and nuker on the walkway (plus a force field on LRTA or lower), then destroy the electrons on the platform ahead and step on it; you will be lowered into a pit with various enemies, so use your new weapon to destroy them then get on the lift in the north-west corner and wait for it to carry you up to a pulsar, which you can run into to teleport to a new area. Ahead of you are some thugs and mines protecting a body armor and a stick, but when you start shooting you will have to contend with a pack of enemies that teleport to the alcoves at the north and south ends of the room. Go up the large steps and time your run up some stairs with crushers to enter a large red hall, then wait for the pillar in the middle of the room to lower so you can grab the C-key and other items on it - watch out for phages shooting at you through the walls, but note that you can fire back. With the C-key, head west down a staircase and turn the corner, then quickly backtrack to avoid some approaching explosions before opening the Σ door at the bottom.

Behind the door are several more enemies, including a thorn thing on "I am immortal" - kill them then jump down the pit at the top of the steps and slay several more enemies while you wait for the green lift in the north-west corner to lower. Once it does, get on that lift and ride it up then walk forward until you see some tiles rise in front of you; wait for the crushers between the tiles to descend, then step past them and follow the hallway until you drop down a pit and land on a damaging black floor. When your health is reduced to 1%, the level and the game will end.

* The vertex count without the effect of node building is 630.