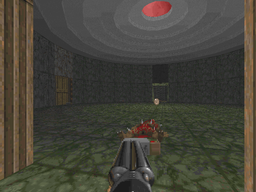 Hole in the ceiling

In this temple lies the key to your ascent to a higher plane, the plane you will have to reach to finish your mission alive. But before you get there, don't let the nice look of this temple to deceive you - evil lies in this holy place, and your task is not easy at all.

In the end you will reach the temple of the distorted Gods, from which you will be able to get to the final stage of your mission. But can you get there alive? 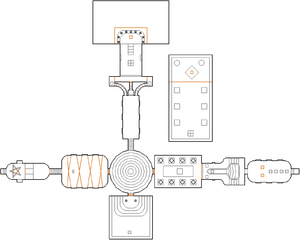 Map of Judgement Day
Letters in italics refer to marked spots on the map. Sector, thing, and linedef numbers in boldface are secrets which count toward the end-of-level tally.

Kill the enemies at the start and enter the rotunda. A lot of enemies are here as well, so get rid of them, then head straight down the stairs. Kill the mancubi, as well as the arch-viles hiding behind the stained glass, then head up either staircase, looking out for another arch-vile that follows. Various monsters are in this next area, and the yellow skull key is at the top of the stairs at the very back. When you pick up the key, head back to the rotunda to find several more monsters have teleported in. Kill them and head through the yellow door. Behind this door, you may see a cyberdemon, but you cannot attack him yet, so take out the other monsters as you head past him. Grab the plasma gun and head into the next room with arachnotrons. You will notice some cells make an invisible staircase leading to the red skull key, so head up the invisible stairs to get the key. Look out for the two arch-viles that show up however, and also the cyberdemon you ignored before will now be active, so take care of him before returning to the rotunda. Back there, take the red door, and you will confront several barons of Hell who will teleport around the room. After killing them, descend the stairs and kill the two arch-viles. Turn around and head back up, as a marble slab will appear with a switch on the opposite side. Pressing it raises a bridge with a megaarmor leading to the pentagram teleporter. Watch out for the cyberdemon that shows up just before the teleporter however. The teleporter leads you to the final courtyard where the exit teleporter is, and several monsters might hinder your progress as you attempt to exit.