MAP20: Last Journey Through Pain (in Vanilla ports, named simply "Journey" on the automap) is the twentieth map of 1000 Line Community Project. It was designed by Justin Kelly (Breezeep), Brayden Hart (AD_79) and SiMpLeToNiUm, and uses the music track "Unearth" from Revolution! MIDI Pack. 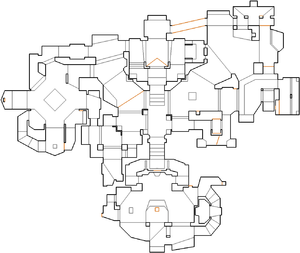 Map of Last Journey Through Pain
Letters in italics refer to marked spots on the map. Sector, thing, and linedef numbers in boldface are secrets which count toward the end-of-level tally.

Head straight forward until you drop down a wall then turn left and follow the path north past some zombiemen until you drop down to a blood pool facing a cacodemon. Turn left to enter an area with a large metal lift and walk round it to find a demon and two imps guarding a super shotgun as well as a lion switch that will lower the lift so you can get on it. Ride the lift up and run south-west to land on a vine-covered ledge, then follow the passage past some more monsters until you can run across a metal platform to a ledge where one or two pain elementals are protecting a berserk pack and a satyr switch that will raise the height of the large lift. Press this switch then drop into the blood and press the lion switch again to lower the lift for a second time; this time, ride the lift all the way up then run north-west to drop into a blood-filled tunnel.

Follow the tunnel east until you make a right turn and go up some steps, then go south up another set of steps and head towards a chaingun which is guarded by a revenant, imps and shotgun guys. Head east when you reach the chaingun and follow the passage until you pass some skin walls - the walls will lower to reveal more monsters, including cacodemons on I'm Too Young To Die and Hey Not Too Rough skill levels or a revenant and Hell knight on Hurt Me Plenty or higher. Continue following the passage to a gargoyle switch guarded by a mancubus and press it to lower the floor, then head east into some damaging red slime and follow it round to a satyr switch that will lower a lift outside; kill the monsters that are released behind you first so they will not block your path. Ride the lift up to a rocket launcher then run north to land on a marble platform; kill the revenants and other monsters that are revealed ahead then follow the platform north and west past a mancubus to enter a tunnel with flesh walls. Go to the end of the tunnel to find a plasma gun then head south to drop into a blood pool containing the blue keycard.

Taking the blue key will lower the surrounding walls, revealing revenants to the east and chaingunners to the south. Head south to the area where you found the chaingun (more enemies will have teleported into this area), then continue south up another set of steps to a satyr switch that will open the metal barricades to your left and right. Go through either barricade to drop into a pit of red slime, run south to a step with a supercharge on it then continue south-east past some imps to some steps with armor bonuses on them. Go up the steps and kill a mancubus and revenant waiting at the top, press the eye switch then drop into the slime again and run west to where a wall has lowered to reveal a demon, spectre and one or two revenants. Step through the wall and press a gargoyle switch to lower a lift on your right, ride it up and kill the mancubus at the top then run south-east across a metal platform to land on the ledge with the white exit teleporter. Stand on the teleporter to be sent into a death exit; the level will end automatically after a few seconds.

At the start, follow the trail of gore on your right to drop into a blood pool full of corpses. You can find a plasma gun and two energy cells in this area.

In the area with the large metal lift on the west side of the level, head north-east from the lift into a passage and follow the trail of health bonuses to another blood pool. A rocket launcher and two boxes of rockets can be found in the south-east corner, but watch out for enemies teleporting in by the entrance when you collect the items.

A partial invisibility can be found due south of the exit teleporter, along with two energy cells and two boxes of rockets.