MAP20: Lurking Fear is the twentieth map of Plutonia 2. It was designed by Jochen Schneidau (Angus) and Adolf Vojta (Gusta), and uses the music track "End Is Nigh" by Jamie Robertson. The par time defined in MAPINFO is 2:30. 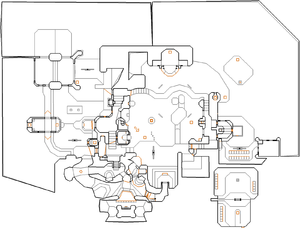 Map of Lurking Fear
Letters in italics refer to marked spots on the map. Sector numbers in boldface are secrets which count toward the end-of-level tally.

Several revenants are facing away from you at the start. Look for a skull switch in the distance on the other side of a fence. Shoot it, and the door opens, while the revenants teleport away. Go around the fence to a teleporter that takes you to the map proper. Cross over the green bridge to the south, killing any enemies that will attempt to hinder your progress. On the tan ground, head all the way west, towards a blocked off UAAF door. North of the door is a switch guarded by a demon. Pressing the switch removes the bars blocking a door all the way to the east. Go there and open the door. Head up the stairs and take the door you see. There is a patio here with a lone imp and a skull switch. By pressing it, the same revenants from before will quickly phase in and out twice. Leave the patio and up the steps you will find a door that was previously blocked off. Open it and jump to the teleporter. You will land on a platform with a super shotgun, and a windy bridge north of you will rise up. More monsters will also be present, so kill them. Head back through the door on the east side and go all the way through the hall till you reach the bridge (alternatively, you can head west instead, then north up the steps, going down another set of steps near the blue door, and then east). Near the staircase on the west side of the bridge is a platform with a skull switch. This one raises some perches in the blood that lead to the blue skull key platform. Jump into the blood and step onto the arrow, and the lift it was pointing to will lower. Get on and ride up, then use the perches to reach the blue key.

When you grab the key, a fierce number of monsters will teleport in, including former humans and a cyberdemon to the far north. Also, some of the landmasses will sink into the blood. To get out, either use the teleporter in the far southeast corner of the blood or the arrow and lift. Head back to the west side of the main area, and there should be a door with blue skulls next to it. Open this door and there are two skull switches to press. The one on the left lowers the wall its on and the other one, where you can get a radiation suit and a box of rockets, but you will also find an arch-vile who teleports away. The skull switch in the middle opens the northwestern blue door, which you cannot open directly. Past the door, it will close behind you and there are plenty of monsters to contend with in this area, including a cyberdemon across the grating to the west. You need to drop into the blood pit to the south, where a door to the right houses a Hell knight and a teleporter. The teleporter takes you to the far north where a cyberdemon and some former humans were, and the yellow skull key is here.

Cacodemons will attack you as you leave with the key, so dispose of them. Return to the west side of the main area, and near the blue skull door, you will find some yellow bars and a yellow door. Open the door, and hit the skull switch to open the bars. Press the skull switch, but be mindful of former humans teleporting right next to you. The switch lowers itself as well as the walls up ahead. It also lowers the door in the northwest, so you can access the walls. Go across the walls killing chaingunners, until you reach the southern cave. Enter it, and you need to drop into the blood. You might want to cross first though, so you can find a radiation suit, although you will have to fight arch-viles and a pain elemental to get it. When you enter the blood, go east and then south to a switch. The revenants from before will do another phasing in and out as you approach the switch, and cacodemons will ambush you as you press it. Take the door north of the switch to be back in the main area, then head through the UAAF door that was blocked before. Go back on the chaingunner walls, and you will find the red key to be accessible. Note that the revenants from before will now teleport in to attack you.

When you pick up the key, you will teleport to the southern part of the main area. Take the nearby lift up and open the red door. Head through the cave, and the wall will open for you. There is a megasphere and a switch here; look out for arch-viles as you get both of them. Upon pressing the switch, head outside and get the BFG9000. You will notice that most of the ground around the blood has sunk in, with demonic walls emerging from there. One final bastion of monsters will also teleport into the main area to stop you from leaving the map, including a spider mastermind at the exit platform and a cyberdemon in the middle, plus revenants, arachnotrons, and pain elementals. When finished with the carnage, go for the northeast part of the blood pit, where you will find an open door with a teleporter taking you to the exit.