MAP20: Mesotamia 2048 is the twentieth map of 2048 Unleashed. It was designed by Malrionn and uses the music track "Drive", created by Kevin Schilder. 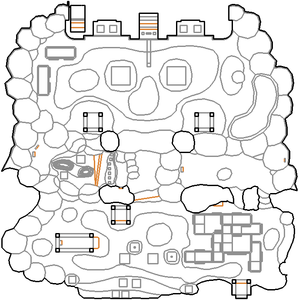 Map of Mesotamia 2048
Letters in italics refer to marked spots on the map. Sector, thing, and linedef numbers in boldface are secrets which count toward the end-of-level tally.

Take the backpack and super shotgun and drop to the ground below. There are imps to your left and demons approaching from your right; there are also revenants and cacodemons ahead, but they will not notice you until you fire your weapons so get into position before attacking. Head south to a sludge pool in the center of the level and climb the steps on your right to reach a supercharge, then look west to see two switches at the end of another sludge pool - when you enter the sludge some bars will close behind you and a baron of Hell and/or an arch-vile will rise from the pool. Kill the monsters then interact with both switches - the lion switch will open the bars, while the chain switch is one of three needed to find the blue skull key.

Return to the sludge in the middle of the level and head south past some armor bonuses - there are chaingunners on a stone structure to your left, as well as some imps on a ledge ahead which will be joined by demons, revenants and one or two knights. With all the monsters killed, look west to see a lift next to some health bonuses - ride it up to find a chaingunner guarding the second chain switch. Drop back to the ground and head east, going round the south side of the stone building to find a ledge with a revenant and one or two imps. Follow the path north through a narrow opening to another sludge pool, which contains spectres and (on Hurt Me Plenty (HMP) skill level or higher) an arch-vile. Go round the stone pillar surrounded by energy cells to find the third chain switch next to a plasma gun.

With all three chain switches pulled, return to the starting area where a pillar holding the blue key has lowered - before collecting it you will need to contend with an arch-vile and some revenants, as well as a cyberdemon on HMP or higher. Take the key and open the silver door next to it, then step into a dark tunnel to finish the level.

Armor can be found west of the starting point.

A rocket launcher sits on a gray step in the north-east corner of the level, along with six boxes of rockets.

* The vertex count without the effect of node building is 2280.