MAP20: Mountain Depot is the twentieth level of Memento Mori. It was designed by Scott Lampert and uses the music track "Terror" by Mark Klem. 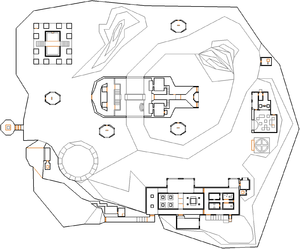 Map of Mountain Depot
Letters in italics refer to marked spots on the map. Sector, thing, and linedef numbers in boldface are secrets which count toward the end-of-level tally.

You begin facing a platform. Kill the shotgun guy ahead of you and ride the platform down. Clear out all the former humans in this corridor and continue straight to a bridge. As you approach the bridge, look for an arachnotron (on Hurt me plenty and higher, two arachnotrons) around the bridge. Climb the staircase ahead to the top. As you reach the top, the two marble-faced walls in front of you will open to reveal an arch-vile and a Hell knight. Equip the plasma gun if available and finish off the arch-vile first, then the Hell knight. Grab the soulsphere from the Hell knight's trap, a plasma gun from the arch-vile's trap and continue around to a door, mowing down more former humans on the way (on Ultra-Violence, there is also a spectre in front of the door).

Beyond this door is a large outdoor area, infested with monsters of all kinds. Your first order of business is to find the western pillbox with a shotgun guy. Enter it by lowering the brown wall in the west, where you can grab a radiation suit that will come in handy for the red key area.

Proceed to the green building in the northwest. Ascend the staircase onto a bridge over a slime pool. Drop into the northern slime pool, kill the two imps down there and use the slime fall that the red key sits on. This will raise the slime pit to the level of the bridge, allowing you to get the red key. While it rises, turn around and prepare for three spectres to come rushing over as soon as the floor is about level.

Head to the "cave" in the southwest of the level. As you enter, a trap opens to your left, with two imps and a chaingunner - a single rocket launcher shot will do the trick. Up to five demons and spectres lie in ambush ahead too. As you continue forward, a wall at the end of the cave lowers, revealing a powerful enemy. On Hey, not too rough and below, it is a baron of Hell, which can be dealt with normally. However, on Hurt me plenty and above, it is a cyberdemon, which is definitely a problem. Lure the cyberdemon out of the cave and fight it around the pillboxes in the area. The enemies in this area are not likely to be able to help much in monster infighting, so you probably have to do most of the damage yourself. Players who do not have the confidence to kite cyberdemons at close quarters can try dropping into the river and climbing onto the central island, which can provide some extra breathing room.

Once the cyberdemon is vanquished, head deeper into its cave and open the red door behind where it was. Follow the staircase up into a new building, full of former humans. Immediately turn right (face east) and follow the corridor through a UAC door all the way to the east, where there is a small door on the southern wall. Open the door to reveal a metal panel with a blue circle, which is a teleporter.

This teleporter takes you to the building in the east. Open the western door and clear out the enemies inside. Open the door in the south to enter a small crate room. This room has some former humans, imps and two demons, but nothing too serious. Work your way to the crate in the southeast corner and flip the switch on its northern face. This lowers the metal pillar in the centre of the room. Grab the blue key from the lowered pillar.

Backtrack to the teleporter you used to enter this building and return to the southern building. Exit the teleporter alcove, turn right and follow the corridor north. Open the metal door in the central structure, then the blue door to get a berserk pack and the yellow key.

Once you have collected the yellow key, exit the central structure and head to the northeast corner of this building. Open the door, kill the former humans inside and flip the switch in the northwest to lower the platform to ground level, allowing you to leave this building.

Drop into the river and head for the northeast of the map, where the exit door is. Open the door for your final enemy - an imp (Hey, not too rough and below), a revenant (Hurt me plenty) or a baron of Hell (Ultra-Violence and above). Step onto the metal plate to end the level.

There is a BFG9000, the first officially obtainable one (aside from deathmatch) in a small room in the west. The room is blocked by three doors, each is opened by a lion switch. One switch at the eastern side of the central building, one is in the northwestern building, and one is at the eastern building. There is also a teleporter that brings you from the southern building to the switch in the center of the map, providing you a little shortcut to reactivate the switches in case you escaped the BFG room when ambushed by remaining lost souls. (The doors will shut behind you when you enter the room, but you can temporarily open these from inside. The doors stay opened only by using the switches.) To get the BFG, there are at least two ways: