MAP20: Processing Area is the twentieth map of PlayStation Final Doom, and the seventh map of the TNT episode. It is based on the PC version of MAP17: Processing Area from TNT: Evilution, with modifications to accommodate the PlayStation's framerate and memory limitations and add enhancements such as colored lighting. It uses the music track "Corrupted".

The author of the original level was Tom Mustaine. Changes for the PlayStation port were authored by Tim Heydelaar.[1] 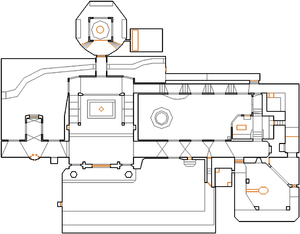 Map of Processing Area
Letters in italics refer to marked spots on the map. Sector, thing, and linedef numbers in boldface are secrets which count toward the end-of-level tally.

In the starting area, go through the door ahead of you or use the second one to the east. Inside, go along the corridor to the east. At the end, turn left and climb the stairs leading into a room with computer screens. Turn left again and take the yellow keycard from a desk.

From this room, go through the east door and turn right at the bottom of the stairs. Go forward into a room with a window and press the switch in the north-west corner, which raises a bridge allowing you to reach the blue keycard. Go through the south door (which requires the yellow key) into a room with many barrels - leave these alone for now. Walk around the nukage pit to its west side, cross the bridge and take the blue keycard. A number of demons will teleport in, but they cannot reach you while you stand on the blue keycard platform. Kill as many as possible by shooting the barrels, then deal with any survivors.

Cross the bridge and leave through the yellow door on your right. Turn left and head west to the room with the large fountain. Climb the stairs and open the blue door at the north end of the room. Go through, climb the stairs and take the red keycard lying on the desk against the north wall. Numerous monsters will teleport in to the room - take the invulnerability powerup next to the keycard if you need it.

Return to the bottom of the fountain room. Go west down a corridor, open the red skull bars and press the switch behind them to finish the level.

When the level starts, turn round and open the gray door behind you to reveal a partial invisibility powerup.

* The vertex count without the effect of node building is 741.