MAP20: Sepulchre is the twentieth map of the Newdoom Community Project. It was designed by Lee Wallis (DooMAD). 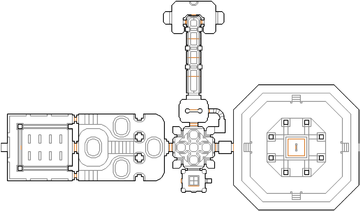 Map of Sepulchre
Letters in italics refer to marked spots on the map. Sector, thing, and linedef numbers in boldface are secrets which count toward the end-of-level tally.

Pick up the shotgun and ammo to open the wall in front of you. Here, grab the chaingun, rocket launcher, and ammo and head north into the next room where you can get a super shotgun. Go down the hallway slowly and enter the next room where you can see the red skull key. To get it, press the nearby switch, watching out for cacodemons coming from both sides. Backtrack now and take the red door on the west side. Here, go to either side door as the central door requires the yellow key. You will be on a balcony overlooking a library. The yellow key is on the balcony, and the library is behind the yellow door. Press the switch inside the library then return to the balcony to retrieve the blue key. Be careful of teleporting monsters as you backtrack to the blue door. Behind this door is a large arena where you will fight a lot of monsters. The exit switch is in the middle, and it appears when you approach the center.