MAP20: Speedtraps for the Bee Kingdom is the twentieth map of the second episode of Back to Saturn X. It was designed by Richard Frei (Tarnsman) and Sarah Mancuso (esselfortium), the latter of whom composed the music track, "Ether." In the official add-on version, this level's name is Dr. Blockmap's Peninsula of Peril. 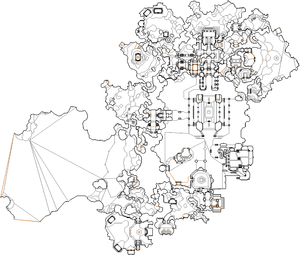 Map of Speedtraps for the Bee Kingdom
Letters in italics refer to marked spots on the map. Sector, thing, and linedef numbers in boldface are secrets which count toward the end-of-level tally.

It is possible complete the level by getting only the red key, if you choose the middle path and go the main entrance of the central building. However, if you go to the passage locked with colored bars without visiting the yellow key area and then proceed to the secret no. 6, after few warps you may find yourself trapped in a veranda after telefragging an arachnotron, without a way to exit it. It is situated in the area with other verandas containing archviles and revenants, which all are opened by a switch outside.

* The vertex count without the effect of node building is 9581.