MAP20: Swept into Immolation is the twentieth map of Valiant. It was designed by Paul DeBruyne (skillsaw) and uses the music track "Anchor" from Memento Mori II, composed by Mark Klem. The par time is 8:00. 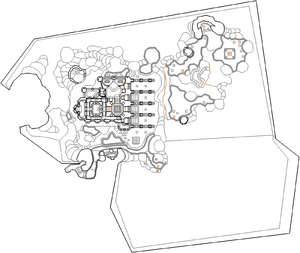 Map of Swept into Immolation
Letters in italics refer to marked spots on the map. Sector, thing, and linedef numbers in boldface are secrets which count toward the end-of-level tally.

Take the shotgun and drop into the lava to find an armor, then shoot the target switch in front of you to lower some bars blocking your path. Run north until you land on solid ground then head north-west and north around the large central building to some orange and black steps, passing one or two arch-viles on the way. Go up to the top of the steps to find one or two arachnotrons on guard before running south to land on a ledge below with two mancubi, then press the skull switch in the south wall to drop into a room with four revenants (or two revenants and two super demons on I'm Too Young To Die and Hey Not Too Rough skill levels). Press another skull switch in the south alcove to open a nearby door, then go through it to drop into an octagonal chamber with five doors - the north-east door will open to reveal the yellow skull key.

Taking the yellow key will open the east door and allow you to get back outside; take the super chaingun in front of this door then go up the steps, where you will find that two more doors to your left and right have opened to reveal two arch-viles (plus four pyro knights on Hurt Me Plenty or higher) - suicide bombers, demons, imps and zombies will also teleport to the south and north sides of the building. Fight your way over to the south side of the building and go up the steps here, then head north through any of the archways to a hallway with a red carpet and go round to its west side to find a chamber with a skull switch. Press the switch and immediately turn round, as a wall will lower behind you revealing imps and an arch-vile (plus a pyro knight on Ultra-Violence and Nightmare); go round to the east side of the hallway, fighting off some revenants that have also been released, to find that a door leading back to the octagonal chamber has opened. As you drop into the chamber the south-east door will open to reveal the blue key, but watch out for two arch-viles that are released behind you when you pick it up.

Go back outside and walk north until you see a blue key door on your left; open it and take the boxes of rockets and energy cell packs inside before pressing the skull switch, which will lower an orange wall behind you to reveal revenants and pyro knights that will teleport to surround you. Head east past some super mancubi on to a bridge and follow this until you go round a corner; the bridge will lower into the lava at this point, so run east to collect a supercharge and radiation shielding suit and get ready to confront a pack of suicide bombers, demons, imps, pyro knights and chaingunners that teleport in. Two caverns in the north-west and south-west corners of the pit will also open, revealing a mancubus and supercharge inside each one - go into both caverns and press the skull switches inside them, which will lower a marble block on the east side of the pit holding the red skull key.

Taking the red key will lower several ledges around the edge of the pit, releasing any imps that have not already been killed. Walk west from the red key then south to a skull switch that requires the red key to lower; press it then head up the steps to get back on the bridge which has risen again. Continue north to reach the exit teleporter.

After running down the lava river at the start, turn left and go up some steps to find a super shotgun guarded by two mancubi.

Climb on the marble step on the north-west corner of the building to find a small chamber containing a skull switch guarded by a chaingunner. The switch will open a tall cavern nearby containing imps, chaingunners, a revenant and an arachnorb; go up the steps inside this cavern to reach a ledge with a plasma gun.

East of the building is a pillar with a rocket launcher; press the skull switch on the west side of the pillar to lower it. Watch out for imps and demons that teleport in to your left and right.

* The vertex count without the effect of node building is 6950.