MAP20: Technodrome is the twentieth map of Community Chest. The objective of the level is to arm a bomb in a demon-occupied base, and then escape in under two minutes. It also contains voodoo dolls sprinkled throughout the level to add some danger to the combat. It was designed by Stephen "The Ultimate DooMer" Clark. 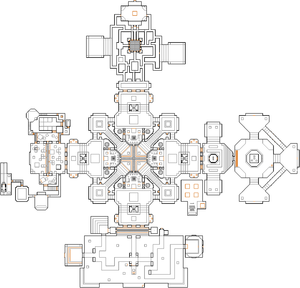 Map of Technodrome
Letters in italics refer to marked spots on the map. Sector, thing, and linedef numbers in boldface are secrets which count toward the end-of-level tally.

Sectors 287 (the eastern sector west of the yellow doors) and 399 (the northern sector south of the red doors) are not closed, as each sector possesses several linedefs from the other.

Because of the nature of secret #4, you can only obtain 80% Secrets in no monsters mode.

* The vertex count without the effect of node building is 5819.