(Redirected from MAP20: The Death Domain)

MAP20: The Death Domain is the twentieth map of The Plutonia Experiment. It was designed by Dario Casali and uses the music track "Message For The Arch-Vile" from Doom II (the same as Doom II's MAP20: Gotcha!). 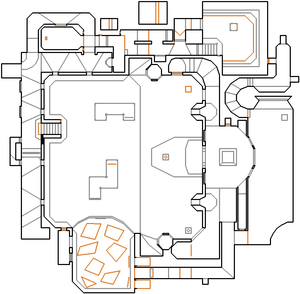 Map of The Death Domain
Letters in italics refer to marked spots on the map. Sector numbers in boldface are secrets which count toward the end-of-level tally.

You start in the large outside area infested by arachnotrons. Revenants also hide in the cages at the tops. If this is your pistol start, turn right and walk around the grey brick tower to find a plasma gun (or a chaingunner on higher skill levels whose chaingun you can obtain). After all, head northwestward in this place. You can see two shotgun shells and a small dead end closet. Flip the switch to build the stairs leading down. Descend down into sewers. Head north and get super shotgun. After that, head east and at the end, turn left to see a lift. This is activated via pressing the switch right here. Using the lift, travel to the highest story. Kill the demons and press the dark blue skull switch. This will open the door in the middle story, so travel there.

You are now in a library. The walls will lower when you approach the east of the library revealing some Hell knights and an arch-vile. The door to proceed further is located in the east of the library but is locked. To unlock, face west and press a bar-like button located near the entrance. After this, be quick and run to the door.

In the next room, you can see a blur artifact in the middle of the room which is behind the fence. Actually, it acts as both a bait and your main objective for completion. Walk into the barrier and take the sphere. Chaingunners (and shotgun guys depending on skill level) surrounding the room will be lifted up. Because you are invisible now, this will make it tough for them to injure you but hurry to eliminate them all. Enter the next door in this room. In the dark room, ascend the stairs up. In the marble room, go southward. Turn left in the corridor and right. You should go past the yellow keycard. You may take it, but this is optional (but very recommended; this will be explained later).

Take the lift and enter the western arena. If you face east you notice two alcoves from which barons of Hell should come out. Be careful, as once they enter the arena they will have the ability to teleport to random points in the arena. Once you dispatch them, enter the second alcove (southern one) in which one of them was. Flip the switch. It will temporarily lower a barrier between fence (north of the arena). When the barrier is lowered, you should make a good jump from here into the nearest fenced pool.

In case if you have successfully managed to drop into the pool, take the blue skull key. Immediately, you will be teleported into another similar pool which unlike the previous one has nothing to collect. Go around here, to teleport again. You will be teleported right on the berserk pack standing near the blue door.

In case if you failed to drop, make another attempt to do. If you have the yellow key, open the yellow door in the starting area. This will lead you back to the arena. Unfortunately, if you got no yellow key, you need to make the very long path back to the key, like the one you did when going for the first time.

With the blue key collected, open the blue door north in the starting area. Ascend the stairs up into the marble room. Turn right to the balcony where the chaingunners were and use the exit portal.