MAP20: The Forsaken Hall is the twentieth map of Requiem. It was designed by Adam Windsor, and uses the music track "Take All (I have more)" by Mark Klem. It is the second smallest level in the megawad, unusually small in comparison to most of the other levels.

This seems to be a quiet, forgotten corner of Hell. You suspect it won't stay forgotten for long. 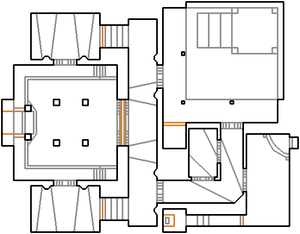 Map of The Forsaken Hall
Letters in italics refer to marked spots on the map. Sector numbers in boldface are secrets which count toward the end-of-level tally.

You only need to get the yellow key to finish this very small map. Head up the stairs at the start and head through the arch you see to find a very large door. Open it into a monster-filled room to get the yellow keycard. Get out of there and go south in the hall to the next arch you can see, then go east as much as you can. When you reach a room with a super shotgun, the yellow door is to the southwest, and a baron of Hell and/or a Hell knight guards the exit.

This level was originally meant to be MAP26 of the sixth part of Demonfear, Demonfear 6: The Heart, which was intended to come out in 1996 but was never released. Windsor would eventually create an entirely different "Demonfear 6" in 1999, and he compiled the whole series into one megawad a year later.