Map20: The Iron Army is the twentieth map of Project Einherjar, designed by Impie in 2016 and constructed in Doom Builder 2. 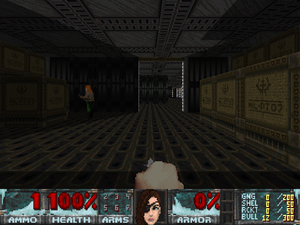 The start point, in the darkness of a storage room. 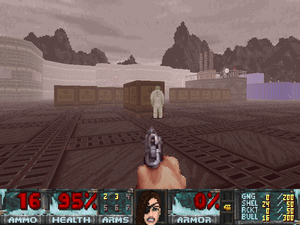 Upper deck of the SS Thrym.

Without the yellow key you can't open the switch-operated door on the reactor's side of the ship's cargo island. Go through the open air vent into the cargo tank and crate-jump to the opposite catwalk, then through another air vent. The door on the other side doesn't require a key and leads onto the deck. Go the opposite direction to the rear storeroom, past the control room from which Skuld taunts you with the blue key. Once you enter the room she closes you inside and opens several Juggernaut crates: before they open, shoot the control box by the opposite door and run through when it opens: the Juggernauts will quickly overwhelm you otherwise. Use the corridor to bottleneck and kill them, preferably with the ballistic knives you've hopefully accumulated. Take a quick gander at the horde of einherjar on display.

Go back through the cargo tank and return to the control room: Skuld is gone, but she has left the key for you. Take it, go outside, and do a perimeter sweep of bad guys. If you have the ammo, kill the einherjars guarding the trailers; otherwise avoid them and head into the main island from whichever door you prefer.

The island's halls are cramped and crawling with troops; if the einhrjars get inside they can easily corner you. If you left the cargo island without the blue key, you'll find the yellow key in the kennel. Return to the reactor room and put on an outland suit before entering to shut off the engines. This gives you access to the bridge, and opens several ambush doors throughout the ship. fight your way through the bridge to the bow catwalk and hit the switch to raise the tower lifts, then go back to the first outdoor area and take the lift up to the red key. Return to the bridge and use it on the console to access the reactor override switches. Flip all three to exit the level.