MAP20: The Last Stand is the twentieth map of Perdition's Gate. 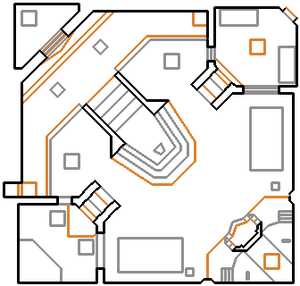 Map of The Last Stand
Letters in italics refer to marked spots on the map. Sector numbers in boldface are secrets which count toward the end-of-level tally.

At the start, open the gate in front then go down the stairs. Go around the pillar then step on either platform to the sides of the waterfall to lower the yellow key behind you. Collect the key then turn left and open the yellow door. As you approach the wall in front of you it will lower, revealing the blue key. Grab it, then exit the room and go forward to open the blue door. Inside, flip the switch ahead and exit the room. Turn left, climb up the stairs ahead and enter the teleporter in front to end the level.