MAP20: The Starport is the twentieth map of Scythe. It was designed by Erik Alm, and uses the music track "Castle Center" from Castlevania 64. A screenshot from this particular map is used as the megawad's intermission screen background, as well as in the title screen. 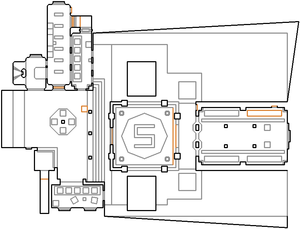 Map of The Starport
Letters in italics refer to marked spots on the map. Sector numbers in boldface are secrets which count toward the end-of-level tally.

A lot of enemies will attack you at the start. Grab weapons and head to the area with crates to the south, where the arachnotron came from. You will find the red keycard and a berserk pack here. Now go through the red door, and fend off monsters as you head down the hall. Flip the switch next to the yellow door, then quickly go back to the door you came in from to find a lift has lowered. Take it to reach a small room with a couple of Hell knights and the yellow keycard. You can use it on the yellow door now, and with it, go up to the next level. Kill the monsters, and you will need to make a running jump to reach the blue keycard. A barrier will lower to the east where you will find a helipad with an 'S' symbol, as well as a rocket launcher and several rocket boxes. When you go east, to a small area with two arachnotrons attacking you from cages and a switch, a cyberdemon will appear on the helipad. Make sure to get rid of him, and then press the switch to open the nearby wall. There are a lot of monsters inside. Make your way to the end of this big area and find the switch on the northern wall. This allows you to leave the helipad area, so do so, and fall into the hellish pit to find the exit.