MAP20: U.S. Mustard Company is the twentieth level of the first episode of Back to Saturn X. It was designed by Matt Cibulas (RottKing), and uses the music track "The Cry" by James Paddock. The par time is 7:15. In the official add-on version, this level's name is State Karate Supply. 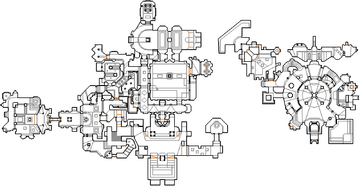 Map of U.S. Mustard Company
Letters in italics refer to marked spots on the map. Sector, thing, and linedef numbers in boldface are secrets which count toward the end-of-level tally.

Take the shotgun in front of you if you need it, then enter the doorway in the south-west corner and press the arrow button here to lower a lift (it has a revenant on it on Hurt Me Plenty skill level or higher). Ride the lift up to a room with some imps and zombies, then step through a gap in the fence at the north end of the room to find a super shotgun being guarded by a revenant and Hell knight. Head up the curved staircase behind the knight and fight through the next room to a second flight of steps, climb them then flip a switch at the top to lower a lift that goes up to the next floor. Follow the path to a chaingun (watching out for a revenant ambush on Ultra-Violence and Nightmare), then kill a mancubus waiting at the end of the hall and press the "LOCK" panel it was guarding to open a door behind you revealing one or two knights. Go through and immediately turn right, fight your way past some imps to another switch and flip it to lower a nearby teleporter, then go round to that teleporter to reach a nukage pit on the north side of this section.

Slay a waiting imp and one or two waiting cacodemons, head around to the other side of the pit to find a door being guarded by an arachnotron then open the door to confront an imp (and revenants on HMP or higher) guarding another teleporter. Enter the teleporter to go to the west side of the map and find a rocket launcher (unequip it as a lost soul is hiding behind the wall), then head on to a large storage hall that is guarded by zombies, imps and one or two more arachnotrons. Go through either of the west doorways to enter a corridor with a red key door - which will take you to the exit later - then continue west to a T-junction and turn left to enter a hallway with a moving shutter. There are two doors at the end of the hallway - ignore the green door and pass through the doorway next to the tan door, which does not open, to enter an S-shaped passage that leads to a "LOCK" panel. Press the panel and kill any demons and zombies that are released behind you, then go back to the now-open tan door and fight past some more imps and zombies (plus revenants on HMP or higher) to a switch that will open a door in the room below.

Go back to the large storage hall and head south to enter a room with two small green doors, open either one then head forward until you drop into a large hall that is guarded by a few zombies and a revenant. Go up the steps at the south end of the hall and kill two mancubi that rise from the floor (plus one or two revenants on HMP or higher), then enter the booth between the steps and flip the switch inside it - this will open a door in the north-west corner and release arachnotrons, as well as opening two closets behind you with lost souls and one or more cacodemons. Go through the door the arachnotrons emerged from and climb some right-angled steps, then head west at the top to an open door and run through it to land in a vat of nukage with two radiation shielding suits. Take a suit then flip the switch on the east side of the column to lower the nukage, taking you down to a tunnel with two mancubi, one or more demons and a trapped arch-vile. Open the door at the end of the tunnel to reveal a baron of Hell, activate the lift behind it to go up to a room with imps and some waiting zombies, then step onto a second lift on the west side of the room and press the arrow button inside the center column to go up to the floor above. Dispose of some demons that come down the steps along with a mancubus and arachnotron, then climb the steps and follow the ledge round to the red keycard.

Flip the switch at the south end of the ledge to open the teleporter next to it, then enter this teleporter to go back to the room with the nukage vat, where the east wall has opened to reveal a lift. Activate the lift and kill any knights waiting on it, press the arrow button inside it to reach the floor above then retrace your steps to the red key door near the large hall and open it to confront one or two revenants. Press the button on the back wall to lower a lift, which holds an arch-vile on HMP or higher, then ride this up and kill a mancubus ahead before trying to open the door next to it - this will actually open two closets behind you holding demons, imps and zombies. Flip the switch inside the zombies' closet to open the door you just used, step through (and kill chaingunners hiding behind the door on HMP or higher) then step on the lift ahead to finish the level.

A Hell knight (Thing 12) has no flags set for any of the three difficulty classes, so it does not actually appear in the level.

* The vertex count without the effect of node building is 5255.