MAP20: Unholy Cathedral is the twentieth level of most console versions of Doom, based on the original E3M5: Unholy Cathedral with modifications made to adapt to the consoles' memory and ROM size limitations. It was converted by American McGee and originally designed by Sandy Petersen. The map first appeared on the Atari Jaguar, and was later ported to the 3DO, Game Boy Advance, Sony PlayStation, and Sega Saturn consoles. 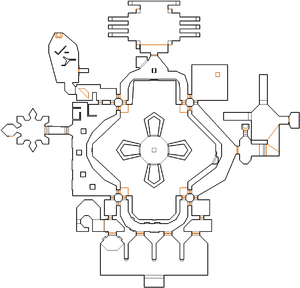 Map of Unholy Cathedral
Letters in italics refer to marked spots on the map. Sector, thing, and linedef numbers in boldface are secrets which count toward the end-of-level tally.

At the start, you can see two openings with green torches in them. Take the opening on the left, and open the door. Go through and turn left, following the passage to two skin doors. Open the north door and step through the teleporter. You will be sent to the middle of the central courtyard, surrounded by four structures; the west structure will open to reveal an enemy guarding some pickups (this structure is secret #8). From this point, step on the teleporter in the north-west corner of the courtyard.

You will arrive in a square room containing a number of demons; kill them and use the berserk pack and medikits to heal any damage. The corner of the room has two skin doors; go through the door on the right (west) and follow the hallway behind it to a marble and metal pillar. Walk through the opening in the pillar and the silver wall in front of it will open; go through this opening to a large red room containing lost souls, plus two spectres on Ultra Violence. There are switches in three corners of the room; press the north-east switch and a nearby platform will lower holding the blue skull key. There is a teleporter in the south-west corner of the room; step through it to return to the central courtyard.

You will return to the square room with the demons. Take the left (south) door this time, which leads to a hallway containing lost souls, joined by imps on Hurt Me Plenty and Ultra Violence. Follow the hallway to the blue door, open it, turn left and head through the exit door. Step on the teleport pad behind this door to finish the level.

After going through the blue door, you can go straight ahead to a wooden door. Go through it to an apparently empty room; as you enter, a section of ceiling will lower behind you to seal you in, and the doors in front of you will open to reveal a number of monsters. After killing them, press the skull switch on the east wall to open an alcove containing a BFG9000 and other pickups. There is another switch in this alcove; press it so you can leave the room.

* The vertex count without the effect of node building is 899.