MAP20: WarTemple is the twentieth level of Icarus: Alien Vanguard. It is set in a simulation of a massive temple, notable for containing a reversed, upside-down version of the first third of the level as the second. It was designed by Rand Phares. 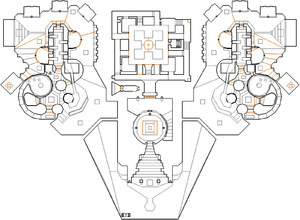 Map of WarTemple
Letters in italics refer to marked spots on the map. Sector numbers in boldface are secrets which count toward the end-of-level tally.

Enter the temple at the start and take the teleporter on the left. In the next area, head up the stairs to the right of where you emerge and go to the intersection with the rocket launcher in the middle. Head through the door going south. It is a fake door so you will pass through it. On the other side you will see two doors. Approach the left door and the right one will open. Go down the passage (the lava is not damaging) and you will find the blue key atop a pillar. Flip the switch at the base of the pillar and head around it to the other side to find a portion has lowered. Step on it to acquire the key, then leave the building. Head all the way around the building to the door at the end, and it will open revealing a chaingunner and an arch-vile. Take the teleporter to arrive back at the entrance of the temple.

The right set of teleporters will be open, so take it to reach an upside-down rendering of the area you were in before. Again, head into the building and head into the intersection with the rocket launcher, then go through the fake door to the south. Here, head towards the right door and the left one will open to the lava passage. At the end, step on the small platforms to reach the yellow skull key. To get out, look towards the ceiling of the yellow key pillar for a switch. You can actually flip it from the ground so do so to lower the platform near the entrance of the yellow key room, then head back through the passage. Now in order to exit, head through the doorway north of the intersection, then take the first left to a switch. Flip the switch to lower a lift, then ride it up to the windowed room. Look to the left for a platform to the stairs. The door is above the stairs, and the only way to reach it is by using the silver lift nearby. Two problems with this though are the column that blocks off most of the lift and the lift is small, so you need to make a precise jump to the open door to reach the teleporter. You also need to get rid of the monsters on top. It is very tough, but possible to reach the teleporter.

When you get back, head down the stairs to the southeast and head towards the wall with yellow skull borders. Shoot the wall to reveal a switch to press, and press it to reveal another wall, this time with blue skull markings. Shoot this wall to reveal another switch, which reveals a large faceted wall with pentagrams. Open this wall to reveal a large, black-walled area. The red key and the exit are here, and to get them, head left first, toward the teleporter, but do not go inside it. Turn right when you reach the teleporter and go all the way to the lift you see. Press it to lower it, then cross over to the north (do not ride it all the way up). There will be another teleporter here, ignore it and go around the bend and take the first right to spot the red keycard. After picking it up, leave and go to the ground floor via the nearby steps, then take the black door to the east to find the exit teleporter. Take it and then press the furthest panel on the right to exit.

After you get the yellow and blue skull keys, head down the stairs to the southeast, and head towards the wall with the yellow and blue skull borders. Instead of shooting at them, turn on the switches (which are invisible), the right for yellow, and the left for blue, and open the large faceted wall with the pentagrams on it, to reveal a large black-walled room. Get the red keycard and exit the level.