MAP20: Waves of Darkness is the twentieth level of Resurgence. It was designed by Josh Sealy (Joshy) and uses the music track "Heartbeat" by Stuart Rynn (stewboy), composed specifically for the level. The map is inspired by the maps by Speed of Doom co-author Darkwave0000, whose name is also referenced in the level's title. 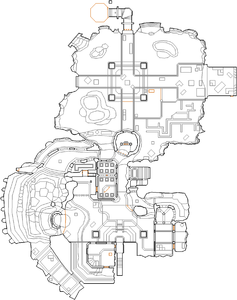 Map of Waves of Darkness
Letters in italics refer to marked spots on the map. Sector, thing, and linedef numbers in boldface are secrets which count toward the end-of-level tally.

The map contains a dark room in the northernmost part of the map, near the bridges where you fight two extra cyberdemons that spawn from the floor. The only purpose of this room is to trick you into believing there is a quick escape from the fight by using the red key, this is definitively a unique feature of this map.

SPOILER: This room is indeed the start sector from MAP21.

* The vertex count without the effect of node building is 3683.