MAP20: X Marx the Spot is the twentieth map of Revolution!. It was designed by Thomas van der Velden (t.v.). When played with the Revolution! MIDI Pack, this level uses the music track "Black Colossus," composed by Hellish Godzilla with edits by James Paddock (Jimmy). 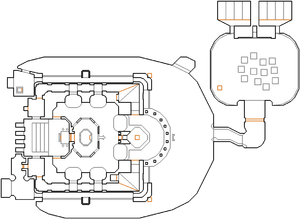 Map of X Marx the Spot
Letters in italics refer to marked spots on the map. Sector numbers in boldface are secrets which count toward the end-of-level tally.

Secret sector #1 cannot be triggered. The sector in question is sector 73, it is not marked as a type 9 (Secret) sector. If one were to look at this map in DEU, which is what the author used when creating the map, the same sector will be marked as sector 109, but it still is not a type 9 sector, while searching for a sector numbered 73 reveals there is no sector in the map marked as sector 73. The maximum number of secrets possible for this map is 50%.