MAP21: 13th Cross is the twenty-first map of the Newdoom Community Project. It was designed by Wes Rath (PumpkinSmasher). 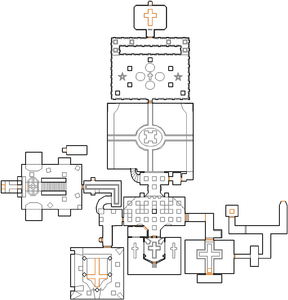 Map of 13th Cross
Letters in italics refer to marked spots on the map. Sector numbers in boldface are secrets which count toward the end-of-level tally.

Head into the cargo room and take the left door. Head south ignoring the blue door and into the next room where the blue key resides in the center of the chamber. Be careful when you pick it up because the cross-shaped sector is a crusher. Now open the blue door and flip the switch. You will open up a hallway to the north. Go through the door into the next room with the stairs. You will notice that there is no bridge connecting the stairs to the ledge, but the switch on the ledge immediately raises one. Grabbing the yellow skull key lowers the bridge and opens two monster closets. After getting the key, head back into the cargo room and go to the eastern yellow door. Follow the hallway to the red key room. You will be surrounded by monsters when you pick it up. If you attempt to go back the way you came, you will realize that you cannot do so. Go to the eastern door in the red key room and follow the hallway to a fork where you should turn right and press the switch to open the left path to a teleporter. This not only teleports you back to the cargo room, but also opens up the north wall into a large courtyard. Pick up the rocket launcher and head into the courtyard towards the soul sphere and the red door. You will enter another big room where you will find the exit by going around the north central structure. In the exit room is a revenant and another cross-shaped sector which acts as a crusher.

Only 87% secrets is possible on this map because of Secret #4 being unreachable.

* The vertex count without the effect of node building is 2130.