MAP21: 2048 BC is the twenty-first map of Whispers of Satan. It was designed by Paul Corfiatis, who also wrote the music track for this level, "Rising Heat". 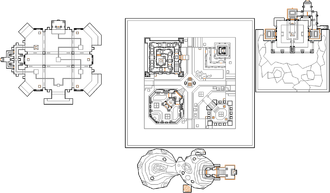 Map of 2048 BC
Letters in italics refer to marked spots on the map. Sector, thing, and linedef numbers in boldface are secrets which count toward the end-of-level tally.

You can get the keys in any order in this map. You need all three to finish the map and they will all be in the southeastern building in the initial area. However you need to go through separate areas in order to lower them all. Once you get all of the keys, head for the exit in the center of the map.

Yellow key: Enter the southwestern building and go through either door. In the next room, kill the revenant and demons and open the door here to find a Hell knight guarding a switch. Press it to reveal a few imps as well as a teleporter near where you entered the building. Mind the crushers, and head into the teleporter to appear in a hellish area. Look out for the imps here, and enter the building. Kill the enemies here and teleport back to the courtyard and the yellow key is available.

Red Key: To reach the northeastern building, head to the east from where the exit is located and cross the wall above the lava. You will have to activate lifts that lead up the pyramid that is the northeastern building, grabbing health and armor bonuses and killing imps along the way, until you reach a teleporter. Enter it and open the door to a large room with many monsters. There are red bars marking a teleporter on the ledge where the zombiemen are located. Head through the door on the eastern side and take the lift up. Head down the hallway, but watch out as several former humans and demons trap you in to the north. Press the switch in their area to remove the bars and continue to the door to reach the teleporter. Take it and the red key is now available.

Blue Key: Enter the northwestern building and follow the hall, looking out for imps and crushers along the way. Take the teleporter at the end and press the switch in front of you. You will now have to go across a thin catwalk. Look out for monsters that appear especially lost souls and cacodemons. When you reach the teleporter with blue bars around it, head through it to access the blue key back at the southeastern building.

* The vertex count without the effect of node building is 4500.