MAP21: Ant Hill is the twenty-first map of Doom 2 Unleashed. It was designed by Chris Harriman (Impboy) and uses the music track "Untitled" from Doom's E2M9: Fortress of Mystery, composed by Robert Prince.

When using the music WAD included with this megawad, this level instead uses the music track "Depression" by Paul Corfiatis. 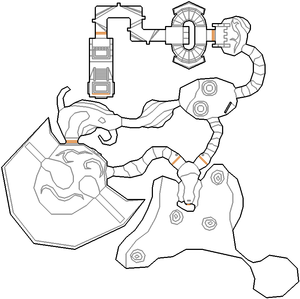 Map of Ant Hill
Letters in italics refer to marked spots on the map. Sector, thing, and linedef numbers in boldface are secrets which count toward the end-of-level tally.

Take the shotgun and berserk pack in front of you then open the door ahead to confront two spectres and a revenant. Go through the door and turn right to kill some imps, then follow the tunnel through some damaging blood to a room with two red torches. Head straight forwards to a staircase and follow it down, killing a spectre halfway down (replaced with a cacodemon on Ultra-Violence (UV) and Nightmare (NM) skill levels), until you reach a room guarded by two revenants on Hurt Me Plenty (HMP) skill level or an arch-vile on UV and NM. Open the wooden door and kill two demons waiting behind it, then go down either staircase to find a cacodemon guarding an armor pickup. Go into the marble tunnel and pass a revenant and one or two Hell knights to find a door guarded by imps.

Open the door and kill two approaching demons, then climb the stairs behind them to confront another knight (replaced by a baron of Hell on UV and NM) guarding a red skull key. Take the key then backtrack through the marble tunnel to confront one or two knights that teleport in, then return to the room with two red torches and head south up another staircase to a door requiring the red key. Open it and kill the monsters visible through the candlelit windows if you wish, then press the skull switch under the exit sign to finish the level.

A chaingun can be found in the room with two red torches on UV and NM.