MAP21: Asmodeus' Circle is the twenty-first level of Plutonia: Revisited Community Project. It was designed by Keeper of Jericho and Przemysław Woda (Belial), and uses the text screen theme from Doom II, composed by Robert Prince. The par time defined in MAPINFO is 4:00. 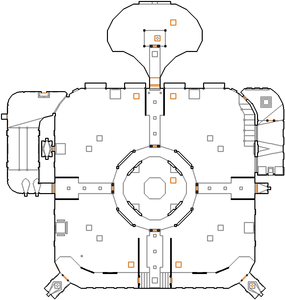 Map of Asmodeus' Circle
Letters in italics refer to marked spots on the map. Sector, thing, and linedef numbers in boldface are secrets which count toward the end-of-level tally.

Because of the high probability that some of the arch-viles will resurrect some monsters, the kill count may exceed 100% anyway on most source ports, but after killing any enemy on the map and standing in front of the exit, one may hear several monsters grunting. Using the iddt cheat shows the remaining monsters moving around in their starting places, unable to teleport in.
To avoid this, try to kill any monster as soon as possible before using any switch.

* The vertex count without the effect of node building is 1783.

This level was inspired by Slayer from Plutonia. It was constructed in a couple of weeks, using Doom Builder.