MAP21: Assassin is the twenty-first map of Plutonia 2. It was designed by Pavel Tvrzník (Pipicz), and uses the music track "I will chop Mariah Carey's head off with a Chainsaw" by Paul Corfiatis. The par time defined in MAPINFO is 4:00. 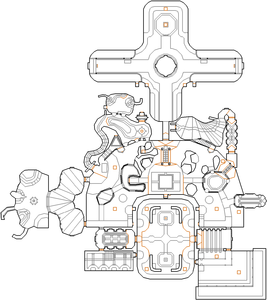 Map of Assassin
Letters in italics refer to marked spots on the map. Sector numbers in boldface are secrets which count toward the end-of-level tally.

A pain elemental, some shotgun guys, and a few other monsters are present at the start. From this starting chamber you can go either left or right, but you must go through both paths to reach the center of the main area.

Try going right and you will be confronted by demons and Hell knights. There are two doors here, and you cannot open the left one right now. Take the right door and kill the imps on the wall, the mancubi in cages, and the baron of Hell. The switch behind the baron opens the left door, so quickly run through it when you press it. In the large area that follows, dispose of the enemies that are littered around the area. You will notice that the path forks in three directions. The left path leads to a switch opening the same door you went through earlier, as well as a teleporter to the left section of the level. The right branch leads to a small room with caged enemies and a load of pickups. Go across the path straight ahead to the room with mancubi and cross the bridge to the northeast. Kill the imps behind the door, and open the next door, going up some stairs with imps and an arch-vile. Hit the skull switch to open the next set of stairs, and climb up. Drop when you see and opening and you will be in front of a satyr switch. This switch raises half of a bridge that you need to cross to get to the center of the map.

The left path is sort of like the right path, in how you get to the main area. If you go from the start, there are revenants and a mancubus, and also two doors. The right one cannot be opened, so take the left one. You will find an arachnotron, a baron of Hell, and some revenants. Again, the baron of Hell guards the switch to open the door that you could not open, so kill him and head through that door before it closes. As with the right path, the left path has three branches at this point. The paths connect via teleporter on the right, and there is also a switch there for going back to the previous room. The path straight ahead leads to the bridges that lead to the center, but you cannot access them until you raise them. Take the door at the left branch, and climb the steps killing imps and chaingunners until you reach the next door. Enter and kill the Hell knights and barons. You will notice a yellow door here, remember it for later and keep going. Press the skull switch behind the pain elemental and drop down to the satyr switch.

After pressing both satyr switches, the middle part of the main area should be accessible from both sides. Get the megaarmor and rockets, and be prepared to fight a spider mastermind. There is a plasma gun and a yellow skull key to the north; take both. Now return to the yellow key door which you saw on the left path and open it. Follow it down to a room with revenants and demons. You will find the red key in this room, and to get it, open the door nearby and kill the arch-viles, then press the skull switch to lower the key. A teleporter south of the key will be revealed, and hopping in takes you straight to the red door. When you open it, you will discover that you have a large contingent of monsters to kill in this cross-shaped room. The northern part of the cross houses the blue key, so to get it, head to both the left and right sides, then use the switches to rise up to the caged ledges. Follow them to two switches, which will lower the barriers and allow you to teleport back into the middle. When you grab the blue key, you will teleport back before the red door. Go forward and press the lion switch with blue lights around it to reveal another teleporter. This takes you back to the starting point, where an arch-vile guards the exit.

* The vertex count without the effect of node building is 3308.