MAP21: Avenger is the twenty-first map of Community Chest. The level is set inside of a town invaded by demons, who you must kill in vengeance for the town's destruction. It was designed by Sphagne, and was originally released standalone. It is the author's tenth level. It uses the theme song of Heretic E1M6: The Cathedral. 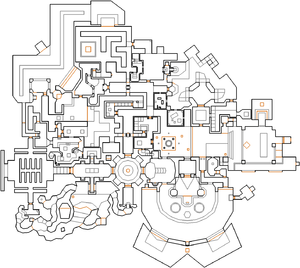 Map of Avenger
Letters in italics refer to marked spots on the map. Sector, thing, and linedef numbers in boldface are secrets which count toward the end-of-level tally.

Take the northern exit out of the starting room, to the end of the open alley, and turn right/east. As you go under the overpass, you pass a ram-head door to the right/south. Enter, go up the short stairs, and take the lift up. Cross the teleport bridge. Take your first right/north, follow the turn in the passage (left then right), and then take your first left/west. The weird silver corner that is revealed by the ambush wall is not useful yet. Instead, go through the ram-head door at the north of that area, and press the switch to your immediate left. That will open up more of the maze.

Go back the way you came, and you'll find the bars have opened. Go through there, and turn left/north and loop around to the northwest. That weird silver corner is now a lift down to another area. Take it and proceed around to the left/west, and the south. Press the switch in the nook near the end. Backtrack a bit and you'll find the protruding corner is lowering to reveal more monsters and the yellow skull key.

Retrace your steps almost all the way to the start: Up the lift, back over the teleport bridge, back down the lift and short stairs, and out into the alleyway. Turn right/east, and follow the turn to the right/south. You'll come to a courtyard with a small raised blue pool. There are lots of enemies across to the north, in windows, and teleporting in, so be ready for a fight. Use the raised wood block with the candle to jump over the wall and down into the sunken area below.

From the blue key room, go north past the grey-hexagon-stone wall. To the left/west, in the corner nook, is a square green switch. Press that to lower a wall. Kill the monsters, and press the red square switch to lower another wall. Kill the monster, and proceed out the door. You're now back in the alleys north of the start room.

Take the first left/south, then left/east, and continue back to the courtyard with the pool. Across to the south is a vestibule with a blue door. Go through the door and straight ahead to the lion switch. Press it, and use the lowered stub to jump over the wall and then down to get the red key.

Use the platform the red key was on as a step, and run and leap over the ridge and down into the lowest level of that area. Once you are on the lowest, horseshoe-shaped part, proceed to the northeast corner, and through the door on the eastern wall. Continue into the blinking silver box, which is a teleporter.

You'll come out in a room next to the exit room. There are potentially many enemies in here, loitering and/or teleporting in; this is probably the hardest fight of this map. Take the shallow stairs up. There is an invulnerability sphere on the platform, but it's in the middle of all the monsters. Depending on when you can get to it, you may or may not want to save it for the final exit room.

Open the red door (from the east of the raised platform), kill the waiting monster, and flip the switch. That will open the wall at the north of the raised platform, revealing the exit room. There will be at least one baron -- depending on difficult, more than one, and/or an arch-vile. The teleport pad in that room is the exit.

There is quite a bit of map outside of the essentials.

The east door out of the start room will eventually take you to the middle level of the area with the red key. Until you complete the essential route, the key is on a raised platform, and cannot be reached, but there are pickups and monsters.

In the sunken area with the yellow door, there is a lift in a nook at the northeast. This will take you to the penultimate room, but the way up to the exit platform is blocked, until you lower the red key platform elsewhere. You can, however, continue south and then through a western passage, to a platform overlooking that sunken area. Step on the wooden block with a candle here to be teleported back to the area with the blue pool. This is the only way out if you jump down without the yellow key.

Because you cannot step on secret #1, you can only obtain 88% Secrets on this level.

* The vertex count without the effect of node building is 2432.